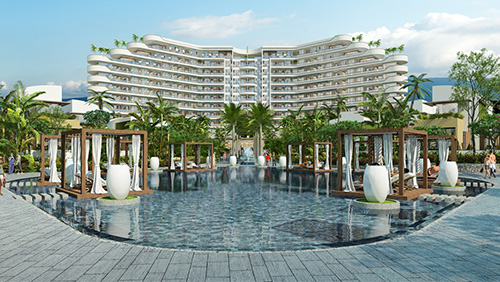 Kahuna Ho Tram Strip, is a 244-key development located adjacent to the north-side of The Grand and will feature a combination of 164 one and two bedroom condominiums as well as eight penthouses located inside a 12 storey tower, as well as 44 premium beach villas, ranging in size from 218 to 223 square meters.

“The company that first brought Vegas to Vietnam, brought the best Asian Tour event that the golfing world has seen is today thrilled to announce that we are riding that Hawaiian wave across the Pacific and on to the shores of Vietnam’s East Sea with our new residential development,” said HTP’s Executive Chairman Michael Kelly. “We have made it our primary focus to ensure that Ho Tram is Vietnam’s entertainment capital, and in line with this, The Grand has unveiled countless new lifestyle amenities. We are viewing Kahuna as an extension of this.  This is not just another residential development, this is a chance to be a part of all of the energy that has made the Ho Tram Strip what it is today,” Mr. Kelly continued.

The company, which also offers the course-side residential Gallery Villas, located on its adjacent golf course, The Bluffs, has been extremely active in the past year. Its second hotel tower – The Beach Club – is quickly rising and is set to begin welcoming guests to its 559 rooms early in 2018; and plans are underway for the commencement of facilities ranging from waterparks and amphitheaters to HTP’s planned international private airport.

Kahuna has been designed by leading HCMC based architectural firm Korn Architects and anticipates breaking ground in Q4 2017.

HTP – a wholly owned subsidiary of Asian Coast Development Ltd. – is the largest international investor in Vietnam’s rapidly expanding tourism industry, and among the largest private-equity US investors operating in the nation today.  It has thus far deployed and committed over US$1.1 billion of the total $4 billion investment it intends to make into the Ho Tram Strip project. The Grand Ho Tram Strip houses Vietnam’s first international-standard casino which was the first official facility licensed to offer live gaming to foreign patrons from the resort’s opening four years ago.  HTP recently became the first company to submit an application to host Vietnamese nationals for a pilot gaming project.

About The Ho Tram Strip: 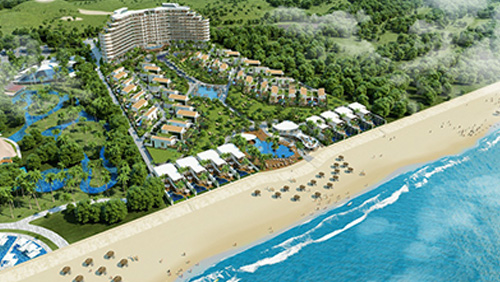 With over USD 1 billion in deployed and committed capital, The Ho Tram Strip is the largest foreign invested tourism development undertaken in Vietnam, and among the largest private equity investments into the country from the United States.

Ongoing construction includes the 559-room second Grand tower – dubbed The Beach Club – which will further expand the entertainment amenities available at the resort.

In addition, a villa development and condotel named Kahuna Ho Tram Strip will be developed adjacent to The Grand’s site on the 2.2-kilometer beachfront development.

Future developments see the Ho Tram Project Company in the early phases of planning its own private international airport to further enhance tourism in Vietnam; while other zones of the 164 hectare development have been earmarked for amenities including amphitheaters, a second integrated resort and various other leisure facilities.

Beyond its many business activities, the company is also deeply involved in several corporate social responsibility projects in Ba Ria-Vung Tau, including efforts that support disadvantaged families and partnerships with vocational schools to provide opportunities for local students in the field of hospitality management.