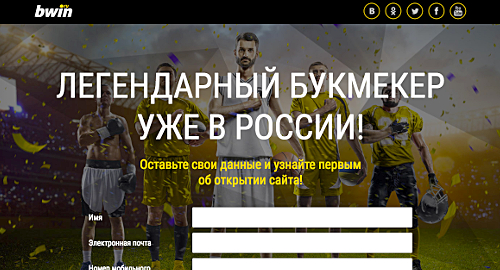 On Wednesday, Russian media outlet Kommersant reported that local billionaire Alexander Mamut planned to launch a Bwin.ru online sports betting platform in conjunction with GVC. The report claimed the betting site, along with a new mobile betting app, would make its debut in “a few months.”

While GVC’s media rep Jay Dossetter confirmed the partnership to Kommersant, GVC has yet to expand on its Russian market strategy. The Bwin.ru domain currently features only a registration page to alert customers as to when the site officially starts taking wagers.

Digital Betting, which was issued a Russian license last year but is only now launching its operations, lacks a retail bookmaking presence in Russia, which is likely why it chose to partner with a recognizable betting brand like Bwin. The Bwin.ru site will enjoy lots of promotion from Rambler & Co’s media properties, which include online gambling affiliate Championat.

Mamut has reportedly pledged to spend up to €10m per year over the next three years to develop the Bwin.ru brand, despite Kommersant estimating that the newly regulated Russian online betting market is currently generating annual revenue of only around €15.7m.

Digital Betting is a member of the First Self-Regulatory Organization of Russian Bookmakers (First SRO), whose president Yuri Krasovsky estimated that Russian bettors’ average online deposit was RUB 10k (US $175), while average monthly revenue per online bettor was around RUB 2.5k.

There are currently only around 10 bookmakers approved to offer online wagers to Russian punters, with 1xbet the undisputed traffic leader, followed by Fonbet and Liga Stavok.

Russian authorities have taken steps to insulate their nascent online betting market from internationally licensed gambling sites, including massive blocking of unauthorized domains – the official blacklist currently contains 118 Bwin-related domains – increased fines for internet service providers who fail to enforce the online blacklist, crackdowns on the use of virtual private networks (VPN) and efforts to choke off the movement of money to and from Russian punters.