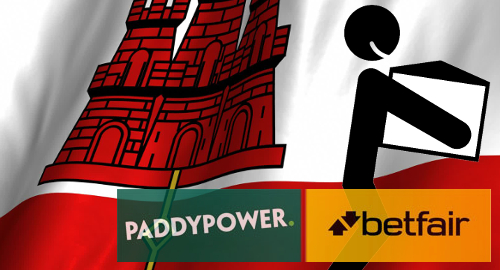 Late Thursday, local media outlet GBC reported that Paddy Power Betfair (PPB) was preparing to board up its Gibraltar office, which employs around 20 individuals. A PPB spokesperson said all Gibraltar staffers would be offered relocation opportunities in London and Dublin.

PPB said the decision to close the office and relocate its functions was the result of an operational review that followed last year’s merger of Paddy Power and Betfair and reflected the company’s desire to simplify and centralize its operations. The company similarly ditched its Isle of Man presence last year.

Gibraltar’s government saw fit to address PPB’s exit, issuing a statement saying it had “a great working relationship” with the company but understood that the office had become “surplus to requirements” following the merger.

The statement emphasized the government’s commitment “to liaise and work with our licensees to ensure any changes in their arrangements in Gibraltar are communicated early and properly understood.”

The office closure is reportedly not a result of the UK’s ‘Brexit’ vote to leave the European Union, even though doubts remain as to how many UK operators will retain their Gibraltar licenses given that the UK’s 2014 imposition of a new online gambling licensing regime had already diminished the value of maintaining a presence on The Rock. (The Gibraltar Betting & Gaming Association continues to fight that battle in European Union courts.)

The Gibraltar government’s statement noted that “whatever Brexit may produce for Gibraltar, Government will adapt its licensing and regulatory arrangements to ensure we remain the premier remote gambling jurisdiction.”

The statement also sought to poke holes in the notion that its online industry was under threat, claiming to have licensed “as many people in 2017 as we did in 2016 and most years before that.” The government claimed that four unidentified European-licensed operators “are developing their applications to be licensed and located in Gibraltar,” offering the promise of “hundreds more jobs” if/when these operators make their move.