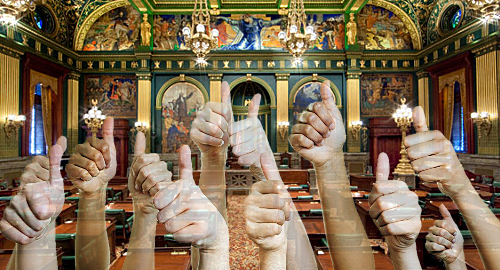 Pennsylvania’s state senate has approved its new gambling expansion bill, but an uncertain future awaits in the state’s other legislative chamber.

As expected, Pennsylvania senators approved their version of HB 271 on Wednesday with minimal revisions and by a significant margin (38-12). The vote was noteworthy for being the first time the senate has approved any measure that contained authorization for intrastate online gambling and daily fantasy sports.

The bill now moves to the state House, which has typically been far more amenable to online gambling legislation. However, the House is also more fond of other gambling expansion proposals, including the controversial subject of authorizing tens of thousands of new video gaming terminals (VGT) at state bars, clubs and other small venues with liquor licenses.

Even if the House were to rubber-stamp their approval of the Senate package, there’s the not-insignificant matter of the 54% tax on online casino revenue contained in the Senate bill. The rate is probably three times greater than what online operators would consider workable, and that’s before factoring in the $5m upfront license fee – and $5m more if you also want to offer online poker – that won’t be credited against future tax obligations.

The House isn’t likely to commence debate on HB 271’s merits (or lack thereof) until after the Memorial Day weekend. With any luck, legislators will be able to chip away at that 54% tax rate. The House has previously opted for online gambling tax rates of 16%, the same rate applied to online poker in the senate’s HB 271.

Whatever changes the House makes, the revised document will require further conference with the Senate to resolve the differences between the two measures before the state’s new budget is due on June 30. It’s at this point we’ll learn just how sincere the Senate is about its new laissez-faire view of online gambling.

It’s unclear how many senators might balk if the House strays too far from that 54% rate. One possible option is bringing the online casino tax down to 34%, the same rate that HB 271 would apply to mobile gambling at state airports. It’s still profit-antagonistic, but looks positively cavalier by comparison with the alternative.