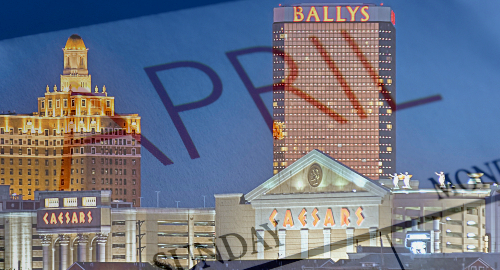 Atlantic City casinos posted the year’s first monthly revenue decline, although the numbers (as always) look more favorable once you play the apples and oranges game.

On Friday, the New Jersey Division of Gaming Enforcement (DGE) released its summary of Atlantic City’s brick-and-mortar gaming revenue for the month of April, during which revenue fell 3.6% year-on-year to $191m.

However – in Atlantic City’s ever-changing market, there’s always a ‘however’ – subtracting contributions from the now-shuttered Trump Taj Mahal and comparing only the seven casinos functioning this year and last, April’s brick-and-mortar gaming revenue was up 4.2%. Throw in the $20.8m earned by the state’s online gambling operators and April’s total gaming win is up 5.8% to $211.7m.

The year-to-date numbers for the current operators are more impressive, with total gaming win up 11% to $843.6m.

While the official April figures show a slight decline in slots revenue and an 11% fall in table games, New Jersey Casino Control Commission chairman Matt Levinson insisted that all seven current casino operators reported rises in slots revenue. Sadly, the table decline was all too real, based largely on gamblers playing lucky.

As ever, MGM Resorts’ Borgata property led all comers with $58.4m (+4.4%) in brick-and-mortar revenue, $200k more than the combined total of its closest two competitors Caesars ($29.9m, +13%) and the Tropicana ($28.3m, +15%). The Tropicana has enjoyed a strong showing of late and posted April’s single biggest percentage gain, but couldn’t hold on to the number-two spot it claimed in March.

Harrah’s was one of only two net decliners in April, falling 7.2% to $27m, while the other net loser was another Caesars property, Bally’s, which fell 5.3% to $17.1m. Resorts remained the gaming hub’s lesser light, with revenue basically flat year-on-year at just under $14m.