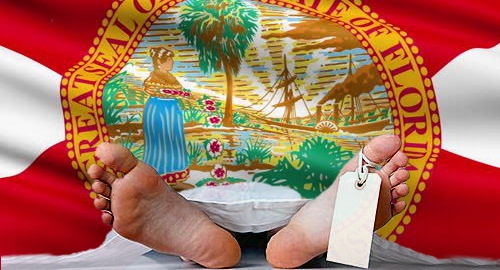 Florida legislators have given up hope of approving new gambling laws this year, offering further evidence that senior citizens aren’t the only things that go to Florida to die.

Tuesday saw key figures in the state House and Senate declare gambling negotiations “dead” for the current legislative session, which concludes on Friday. And so concludes yet another failed effort to achieve consensus among the state’s commercial and tribal gaming operators, as well as anti-gambling types trying to limit the industry’s further expansion.

Lawmakers were attempting to resolve differences between a Senate proposal to authorize slot machines at pari-mutuel racing operators outside South Florida while the House sought to keep slots within Miami-Dade and Broward counties. The possible addition of a major commercial casino in Miami was also thrown into the mix.

A compromise appeared to be in play late last week but Rep. Jose Felix Diaz told reporters Tuesday that the parties were still “too far apart.” Diaz cited the pari-mutuel slots expansion as “the big divide” that ultimately scuttled a deal getting done.

State Sen. Bill Galvano warned that the failure to get a deal done means the slots question will likely be decided by the courts. The Florida Supreme Court recently ruled in favor of a proposed constitutional amendment that would give voters the “exclusive right to decide whether to authorize casino gambling.” However, a separate pending case before the court will decide whether only Broward and Miami-Dade counties can host slots facilities.

TRIBAL UNCERTAINTY
The state’s inability to get ‘er done means continued uncertainty regarding the Seminole Tribe’s financial obligations to the state. Both the House and Senate had expressed a willingness to approve the Seminoles’ new gaming compact, which guaranteed the state a $3b cut of gaming revenue from the tribe’s seven casinos.

The gaming compact extended the Seminoles’ monopoly over house-banked card games while permitting the tribe’s casinos to add roulette and craps. But the tribe accused the state of violating the house-banked monopoly of their earlier compact by allowing commercial cardrooms to offer so-called ‘designated-player’ games, and federal courts have supported the tribe’s argument.

Despite this disagreement, the tribe continues to make monthly payments of around $20m to the state as a show of good faith. The failure of the legislature’s latest gambling negotiations raises questions as to how long the Seminoles will go on making these payments.

The tribe’s outside counsel, Greenberg Traurig attorney Barry Richard, told Florida Politics’ Jim Rosica that the tribe would “react accordingly” to the demise of gambling negotiations. Richard declined to speculate on whether the tribe might withhold its monthly payments, but noted that it was “an option” if the state fails to “take action to shut those [designated player games] down.”

DFS REGULATION EVEN MORE OF A FANTASY
The gambling package that Florida legislators had been considering also included whether to legalize and regulate daily fantasy sports operations in the state. This effort also appears dead in the water, and while some standalone DFS bills have been introduced, there’s unlikely to be sufficient interest in pushing these forward, given that the state has far bigger fish to fry, including finalizing its annual budget.