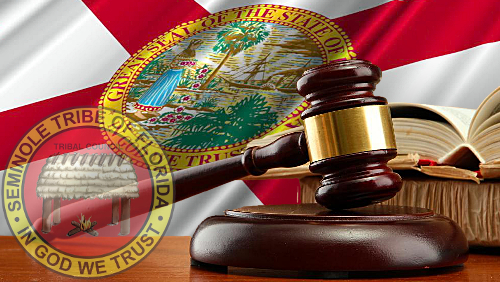 Florida’s Seminole Tribe has emerged victorious in its legal fight with the state over the right to offer blackjack and other banked card games at its seven casinos.

On Wednesday, Federal Judge Robert Hinkle ruled that the state had violated the terms of its 20-year gambling compact with the tribe by allowing pari-mutuel gaming operators to offer so-called ‘designated-player’ card games. These games feature one player at each table nominally acting as the house, although in practice the role is generally farmed out to third-party companies due to the financial requirements.

In 2010, the Seminoles inked a 20-year gaming compact with the state that allowed the tribe five years of exclusivity over house-banked card games like blackjack and baccarat, from which the state realized $1.7b in revenue sharing. But during this five-year period, the state authorized state horse- and dog-racing tracks to offer the designated-player games at their cardrooms, prompting the Seminoles to accuse the state of reneging on its deal.

In 2015, Gov. Rick Scott reached agreement on a new gaming compact but this was rejected by the state legislature this spring. In the interim, the state filed a lawsuit to force the Seminoles to stop offering house-banked games while the tribe responded with its own lawsuit accusing the state of bargaining in bad faith.

Hinkle’s ruling will allow the Seminoles to continue to offer banked games for the duration of their original 20-year compact. Echoing a separate ruling in the state in August, Hinkle called the designated-player games an “egregious example of the cardrooms’ attempt to evade the prohibition on banked card games.”

Wednesday’s verdict will likely spur stalled negotiations on a replacement compact, but given the Seminoles’ improved legal footing, whatever new deal emerges likely won’t match the $3.1b guarantee the state could have reaped over the first seven years of the compact the legislature rejected this spring.