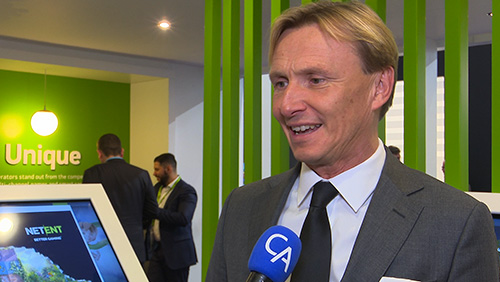 In this interview with CalvinAyre.com’s Becky Liggero, Per Eriksson of NetEnt introduces the company’s newest virtual reality offerings.

Virtual reality is no longer the fad that most people thought it would be. Technological innovation has made it more relevant in our lives, altering the landscape of every industry, from the military to healthcare, entertainment, gaming, education, fashion and, of course, gambling.

As more and more people embrace virtual reality in their lives, gaming technology providers face a daunting task of coming up with new, sophisticated offerings in a shorter period of time in order to stay ahead of the competition.

NetEnt, a leading Swedish gaming technology provider, said the future of gambling lies in virtual reality, since it is a supplement to all other advanced devices. Per Eriksson of NetEnt believes virtual reality is here to stay.

That’s why Eriksson said that they have lined up new virtual reality games in order to keep players engaged. They expect to launch their virtual reality products by the end of the year or in the first quarter of 2018.

“We actually have slots that we will launch later on this year or beginning of next year. Depending on the technology. Because we are ahead of the technology when it comes to developing this. It will be real money slots,” Eriksson told CalvinAyre.com

“Planet of the Apes, an iconic brand, 50 years heritage, there’s a new Planet of the Apes coming this year so, it is a super good timing and we are so pleased to have it. And also, there will be an emoji film in July. We launched the emoji slots in August,” he said.  “You are all familiar with emojis. I used them this morning, sending messages to my wife. This slot will be a completely different type of slot, more of a social twist. And it goes well with the emojis, so we are really excited.”

Eriksson also boasted of its new live casino, wherein the background changes with the use of Chroma key. He claimed that only NetEnt has this feature.

“We have a Chroma key background, so it doesn’t matter where you stand, you can have whatever background you want. This makes the whole product so scalable. You can have the same dealer in front of the camera but you can use different backgrounds. So depending on which operators are using it, you can have your own brand and it doesn’t cost you anything,” he said. “So that is something special. And we are launching something we call real rewards. So that’s the tool where you can get your reward instantly and also you can get different type of rewards, for example, when you win a lucky number, you can win ten free spins on slots. That is something that no one in the industry has, so we are pleased with our innovation.”