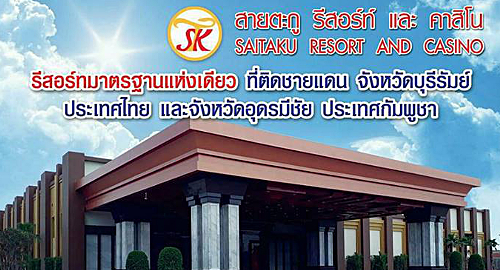 On April 7, the new Saitaku Resort and Casino had its soft opening in Cambodia’s Oddar Meancheay province, just across the border from Thailand’s Buriram region. Since Cambodian nationals are prohibited from gambling in Cambodian casinos, the new casino will depend almost exclusively on an influx of Thai gamblers.

Trouble is, Thai authorities barred their citizens from crossing over the Chong Sai Taku checkpoint to visit the casino. While 300 invited VIP guests were allowed to attend the casino opening, where Thai pop singers were on hand to provide entertainment, Thai border guards prevented non-invited guests from making the trip.

The Nation reported that the Thai guards were tight-lipped regarding the reason behind the restrictions, saying only that they were following orders. A Thai Army commander denied any special rules were in force, saying the military was simply following normal procedures by only allowing residents of the immediate vicinity to cross into Cambodia.

On Wednesday, Cambodian authorities retaliated by blocking their citizens from crossing over into Thailand. The tit-for-tat restrictions are reportedly wreaking havoc with non-gambling merchants on both sides of the border who depend on a steady stream of tourists for the bulk of their business.

The controversy began last month, when Thai provocateur Veera Somkwamkid claimed that the Saitaku casino was located inside the confines of a Thai national park. The region has been the subject of numerous border disputes between the two nations over the years but Thailand’s National Parks Department insisted that the casino was clearly on Cambodia’s side of the dividing line.

Veera, who accused the Thai army of collusion in permitting the Saitaku casino’s construction, subsequently attempted to lead a delegation of his followers and Thai media on an inspection of the casino site but local Thai villagers blocked Veera’s path, reportedly due to concerns that the hubbub would put a crimp on local commerce. Those concerns have now become reality.

Thailand doesn’t allow casino gambling within its borders, a prohibition that has led to a thriving Cambodian border casino industry. In 2014, the military coup in Thailand forced the temporary shutdown of all border crossings with Cambodia, leading to some border casinos in Poipet reporting business falling off as much as 40%.