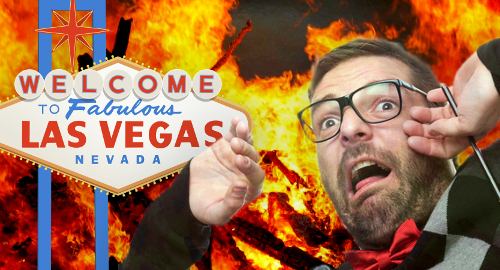 Nearly half of Americans believe professional sports leagues establishing teams in Las Vegas will result in players and referees betting on the outcome of games, according to a new poll.

NFL owners approved the Oakland Raiders relocation to Vegas last month in a move that was seen as another crack in the NFL’s already crumbling foundational opposition to all things gambling. But a new Seton Hall Sports Poll suggests the move will do damage to the NFL’s reputation, or, at least, the league’s perception of its reputation.

On Thursday, Seton Hall’s pollsters revealed that 46% of the poll’s 687 respondents believe having an NFL franchise in Vegas will “increase the likelihood of players, referees or team officials gambling on the outcome of games.” Yet 47% saw no reason for teams not to make Vegas their home, while just 27% said teams should steer clear.

Of course, if players and officials are betting on their own team to win, all the better, say us. The same can’t be said for referees, which would resurrect memories of National Basketball Association ref Tim Donaghy, who was forced into early retirement a decade or so ago after pleading guilty to betting on NBA games in which his calls helped decide the outcome.

Perhaps that’s why 21% of the Seton Hall poll’s respondents are convinced that the Vegas Raiders will tarnish the NFL’s reputation. Only slightly less (19%) said the National Hockey League’s imminent launch of the Golden Knights expansion franchise would do damage to the NHL’s brand.

Poll director Rick Gentile called the reputation results “high negatives” and suggested it was “hard to imagine any other major American city that would provoke such concern.” The poll results are likely to spark even more sweaty palms at NFL headquarters, given last season’s television ratings plunge.

Meanwhile, former Raiders coach John Madden has publicly slammed the team’s move to Vegas, telling SiriusXM NFL Radio that he would “hate to have my team in Las Vegas on Saturday night before a game.” Madden expressed concern over how the “bottom 10” (in reputational terms) of every team’s roster would handle the temptations of Sin City.

It’s sad to hear Madden talk like this, especially given that his go-to quarterback in the Raiders’ 1970s heyday was a committed bottom-10’er by the name of Kenny ‘Snake’ Stabler, who famously claimed to study the team’s playbook by the light of a jukebox. Whatever happened to ‘just win, baby?’

Seriously, every NFL city has bars and strip clubs, and betting is available on your phone 24/7 via any number of internationally licensed online sportsbooks. So get over it, puritanical sports fans.