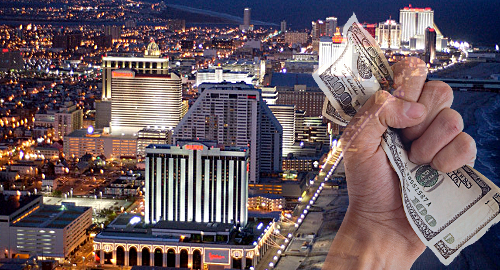 If you subtract the currently shuttered Trump Taj Mahal’s contributions from March 2016’s total, the year-on-year improvement rises to 14.9%. If you count online gambling’s record contribution of $21.7m, total gaming win was up 16.9% to $221.8m

The Borgata maintained its point of pride atop the brick-and-mortar revenue chart with $59.9m, up 11.5% from the same month last year. The Tropicana leapfrogged the Caesars Entertainment properties that usually occupy the second- and third-place spots on the podium by earning just under $31.4m, a nearly 40% year-on-year improvement, thanks in part to slot machine hold hitting 9.7%.

Those aforementioned Caesars properties didn’t do all that badly, as Caesars AC enjoyed the month’s second-largest bump, rising nearly 32% to $29.3m while Harrah’s rose a more modest 3.7% to $29.6m. The other Caesars property, Bally’s, was one of only two net losers last month, falling 2.2% to $17m while the Golden Nugget dipped 1.7% to $16.5m. Resorts was low man on the totem pole with $16.3m, despite rising 25% year-on-year.

Most of AC’s surviving casinos posted increased profits in 2016, thanks in part to the market ‘rightsizing’ via the closure of five venues since 2014. That’s set to change in summer 2018, when Hard Rock International reopens the Taj Mahal as the Hard Rock Hotel & Casino Atlantic City following the property’s music-themed makeover.

While the other seven casinos might not appreciate the Hard Rock taking a bite out of their revenue, they have less to fear from plans to relaunch another shuttered property. The new owners of Caesars’ Showboat Casino, which closed its doors in August 2014, plan to open a gambling-free millennial playground this Memorial Day weekend.

According to a press release from owner Bart Blatstein and project partner Venturis Partners, the plan is to convert the Showboat’s 150k-square-foot convention space into the Atlantic City Fan Xpo (ACFX), which will encompass eSports, video games, a sandlot beer garden, live music, movies and other entertainment options, all of which will only be available on weekends during the summer months.

Prior to selling the Showboat, Caesars slapped a deed restriction on the property, barring future owners from operating a casino on the premises. The Showboat’s hotel reopened last year but the ACFX marks the first effort at broadening the property’s appeal.