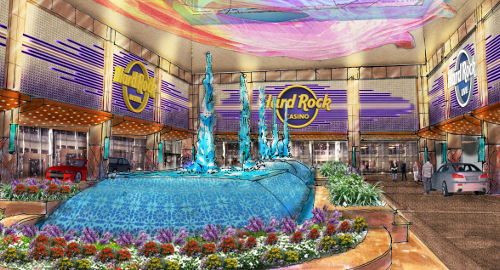 On March 31, HRI officially took possession of the Taj Mahal from former owner Carl Icahn, who sold the property to HRI earlier that month. At the time, HRI declared that it planned to invest “more than $300m to purchase, substantially renovate and reopen the casino,” which was closed last October after Icahn failed to reach accord with the property’s unionized workforce.

On Wednesday, HRI released details of its renovation plan, which now carries a price tag of $375m. HRI chairman Jim Allen said the project would create 1k construction jobs and 3k permanent jobs once the redesign is complete.

HRI says the venue, which will be rechristened the Hard Rock Hotel & Casino Atlantic City, will open in summer 2018 with 2,400 slots, 130 gaming tables and scads of non-gaming amenities.

Examples of the latter will start even before guests arrive courtesy of “reimagined” entrances leading to a “new check in experience” and lobby lounge. The interior of the venue will be completely redesigned, including “lavishly appointed” guestrooms and suites.

HRI intends to relocate the property’s existing Hard Rock Café Atlantic City to a new centrally located 400-seat venue featuring an improved stage and beach access. The property will host two separate arenas that will accommodate a total of over 7k seats.

Music will play a central role in the property’s redesign, including plenty of rock n’roll memorabilia – with a focus on New Jersey-based artists – ensconced in “museum-like displays” along the property’s walls. HRI also plans to offer “complimentary in-room Fender guitar checkouts,” which likely won’t sit well with diehard Gibson fans, but you know, screw ‘em.

HRI operates 11 casinos in Florida and around the globe, along with the dozens of Hard Rock Cafes, which promote around 30k live music events per year. Mitchell Cypress, VP of the Seminole Tribe that controls HRI, said the new AC venue would aim to bring more midweek entertainment events to AC. Cypress said he has “tremendous respect for my competitors, but Atlantic City’s turned into a one-and-a-half-night town.”