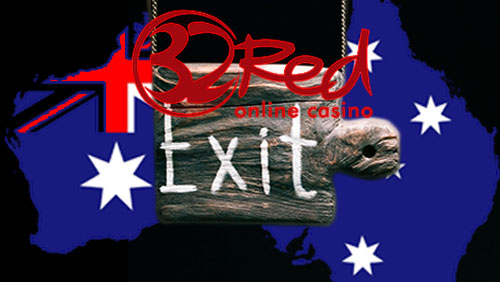 The Gibraltar-based online gambling outfit, 32Red, has started plans to withdraw their services from the Australian market, and PokerStars players based in the country will get the final chance to compete in the Spring Championship of Online Poker after a delay in finalising the new bill.

The Gibraltar-based outfit has informed their affiliate partners to explain to customers that they will no longer take new Australian registrations from April 3, 2017, and to stop promoting their products to Australian punters with immediate effect.

The new bill, put together by Australian Human Services Minister Alan Tudge, makes online gambling a criminal activity because no framework allows offshore companies to operate within the place where kangaroos like to hang out.

32Red joins the likes of Vera&John, 888 Holdings, and William Hill who have all left within the past 12-months.

According to Haley Hintze over at Flushdraw, the new bill won’t come into effect until mid-June putting a smile on Australian based players who like to throw their chips around PokerStars tables.

The amended bill is not likely to receive its final rubber stamp until a new governmental session begins on May 9, 2017. After House approval and Royal Assent, you are talking sometime in June before the bill finally becomes law.

All of this means that Australian based players can compete in the upcoming Spring Championship of Online Poker (SCOOP) on PokerStars before having their accounts closed down.

PokerStars’ 2017 edition of SCOOP is the largest in their history with over $55m offered up in guaranteed prize money during the three-tiered extravaganza.

The biggest online poker room this side of the moon has written a teary-eyed email to their Australian based players explaining how they will be left with no choice to depart from Australia once the bill becomes law. The email promised players that their money was safe, that they love them dearly, and even singled out the Australian Online Poker Alliance (AOPA) for all the sterling work they did in their attempts to create a carveout for online poker.