Lee Davy delivers his trip report from Day 1A of the Unibet UK Poker Tour in the Rendezvous Casino in Brighton.

You know times have changed when you move all-in, and your opponent notices that you have the word NAPPIES written on your hand in blue biro.

I don’t play much poker these days. A combination of being broke, having a six-month-old, and realising there are more important things to do than sitting on my ass for 12+ hours flicking cards into the muck are the reasons why.

I arrived at the Rendezvous Casino in Brighton an hour late. That’s par for the course for the cool cats, but I’m one of those that likes to squeeze every moment out of the game. You know, the type of man who turns up on time, and starts playing heads-up with the only other geek sat at the table.

Marc Convey was in the house, as was Jon Spinks and Manig Loeser, and after a couple of man hugs, I was right into the action of Day 1A of the Unibet Open UK Tour.

The buy-in was a respectable £220. The re-entry rules allowed for one re-entry per flight, but I am a one bullet man. While £220 is reasonable for a poker tournament offering a £40,000 Guarantee, it’s still the cost of 22 packs of nappies.

I joined late in Level 2, and with the levels set at 40-minutes, I never felt rushed. I often see my stack dwindle to 10 big blinds in the blink of an eye, but not in this event; there was plenty of room to play poker.

It felt right being in the game again. The last time I played was September, and I was ring rusty. I wanted to make a concerted effort to talk more and have fun, but I found it harder than I imagined.

I sent a text to the boss to see how she was doing.

“She is on the nipple, so everything is cool.” Came the reply.

So I started talking about breastfeeding, but nobody wanted to play. Then Charlie Godwin from partypoker sat down, and I changed the subject rather rapidly.

Talking Shop at The Break

Nothing major happens by the time the first break arrives. I have lost 5k, and get into a conversation with Jon Young. Jon used to be the Editor of the WPT Europe magazine and was instrumental in getting me some work in my early years when I was writing for free. My breath was buzzing. I knew it. Jon knew it. He offered me a mint. I don’t eat sugar, but I relapsed on the part of our relationship.

We talk about kids. I tell him how I left the European and World Poker Tours to be closer to my boy and now I never see him.

“He only rings me when he wants something,” I complain.

Back to the action and a tall, mean looking guy slow rolls the Table Captain after hitting Broadway on the turn. The Table Captain has two pairs and hits a full house on the river.

My phone goes. It’s my boy. It’s midnight. You don’t want your 16-year old boy ringing you at midnight on a Friday night. I text him to say I am in Brighton. He tells me he has lost his wallet and wanted to know if I could pick him up so he could look for it.

Like I said, they only call when they want something.

I decide not to drive for four hours to search for my son’s wallet and instead open with pocket eights from UTG, Charlie three-bets me for the second time; an aggressive player on the button four-bets and I fold, as does Charlie. I make a mental note.

“Charlie is picking on me because she knows I am a writer who doesn’t know anything about poker.”

Wow twice in one day, whatever happened to the fun and frivolities of grassroots poker.

“It’s ok, I know him.” Says a red-faced Table Captain.

I stare at his nails. He has chewed them down to the cuticle. I pretend I am Benedict Cumberbatch in Sherlock Holmes and start creating this vision of a nervous wreck and decide to three-barrel the hell out of him later. I know, this is how my brain works.

Another Break; No More Table Talk 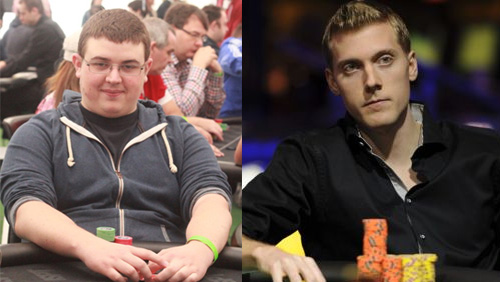 I have 20k at the second break. I get involved in a conversation with Jon Spinks and Manig Loeser. Jon’s nipper was born a few days before mine. He has a boy. I have a girl.

“Are you feeding her solids yet?” Jon asks.

“The shit is something else, innit.” Said Jon.

At this point, Manig looks like he wants to talk about poker but decides to keep quiet. Jon and I proceed with our conversation about baby shit. He speaks of the complexities of handling a baby with a penis, and I talk about the skillset required to scoop the poop out of the lady bits.

“Here’s a trick,” I say to Jon, “When you change the nappy, put the new one down before the old one, that way if they piss or shit before you are ready the new nappy catches the mess.”

I have been called a nit before, but never a nappy nit.

We return to the tables. Poor Manig didn’t say a word for 20-minutes, stood there looking cool as fuck in his black leather jacket. We have probably put him off having kids for life.

Keeping Up With the Kardashians

“Look at that,” says Table Captain.

I keep turning around to see a bunch of Kim Kardashian lookalikes swanning past with tight fitting skirts and heels the size of stilts. Not exactly my cup of tea with the word NAPPIES heading towards my wedding ring.

“Look at that!” Table Captain shouts as another waif wafts by as his cards fly into the muck. “I missed my draw.”

We have a new Table Captain. He is a quiet guy wearing Apple earphones and drinking a J2O. He opens to 1.5k UTG, and I call with 87hh on the button. Charlie squeezes to 6k from the small blind, and the Table Captain four-bets and we both fold. I tell myself off for not three betting instead of flatting and move on.

The journey is wearing on me.

Nobody is talking, not even the lad who loves the Kardashians.

A crappy player limps from up front, and I raise to 2k from the small blind with A8ss so I can play a pot heads-up against him, but Charlie calls in the big blind. The flop is JsTs6h; I bet 2k and they both call. The turn is the Qd, and I bet 5k; Charlie folds, but the limper calls. The river is the 7d, and I move all-in for 15,000, and he folds.

Somebody Called The Clock

I don’t think I would ever call the clock on someone.

The party is ending.

The Kardashian lookalikes are leaving; only they aren’t moving like the wispy waifs that arrived, they look like a bunch of circus clowns trying to walk a few feet without falling off their stilts.

I look up at the clock.

Jon Spinks is sitting next to someone who looks like Queen Victoria, and Espen Uhlen Jorstad is on my direct right.

Earlier, I told you how I found it difficult breaking the ice at my table and how my conversation about breast milk didn’t work. Well, Espen has it down to a tee. The Unibet Ambassador engaged me in conversation immediately, and while I am sure he was being polite, I also realised that I was giving a lot of information away about my game.

And then a critical hand happened, and I didn’t see it because I was busy talking to Espen about life.

The turn is an offsuit jack, and we both check. The river is a ten, he checks, and after some time thinking about what to do, I decide to check, thinking he wasn’t going to be calling with worse and I didn’t want to face the check-raise.

Spinks looks at me like my baby has just shit in his eye.

“Didn’t you just see him barrel off with eights? You just lost about 30k in value there.” He tells me later.

And that’s one of the reasons I am not a fan of talking at a poker table.

It’s getting late. I am starving. There is nothing on the menu that I can eat, so the chef kindly offers to make me a salad for £2. 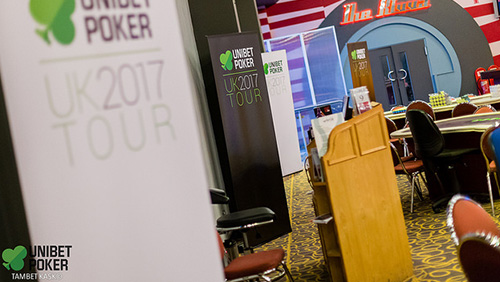 I move tables another three times before an old guy opens UTG and I flat in the big blind holding 86o. The flop is J86, and he moves all-in. I snap call, and he shows AJ and pings an ace on the river.

I go into my Zen thought mode and remind myself that the hand is gone. Move on. Concentrate on your £2 salad and the next hand.

An old lady, sipping herbal tea, three barrel bluffs a young wizard and shows him. I start laughing. I couldn’t help it. He wasn’t happy. What made it even more magical is when the river was laid she squinted at the board and asked the dealer, “Is that the queen of diamonds?”

I move to my final resting place. The Chinese guy next to me has only nine fingers. Why do so many poker players have missing digits? I wonder if he is some triad gang member, or whether a squirrel chewed it off when he stuck it into a hole in a tree looking for Woodpecker eggs.

“Thank fuck for that. I feel like I have Parkinson’s Disease I am that tired.” He says before three-betting a young lady who had opened from late position.

I four-bet with QJo on the button; the lady folds and the tired man with Parkinson’s informs me I can have it because he is too tired to play and can’t stop his hand from shaking.

I bag up and have 106k, and follow the Kardashians down the pier getting ready to catch one of them when the wind blows them into the sea.