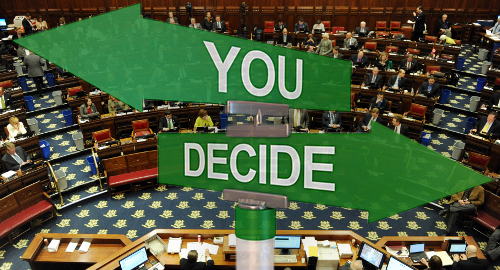 A Connecticut legislative committee wants someone else to decide which of the state’s competing casino expansion bills should go forward.

On Wednesday, the General Assembly’s Public Safety and Security Committee approved two different casino expansion bills by large margins following minimal debate, almost as if the legislators were trying to get these hot potatoes off their desks and onto someone else’s as fast as humanly possible.

In fact, legislators freely admitted that their votes were intended to allow the full House and Senate to weigh in on the proposals, both of which carry the potential for significant ramifications above and beyond their stated language.

The Senate bill would approve the state’s two gaming tribes opening a joint venture casino off tribal lands in the East Windsor area. The Mashantucket Pequot and Mohegan tribes, which operate the Foxwoods and Mohegan Sun casinos, respectively, say the third casino is necessary to compete with the MGM Resorts casino being built just across the border in Springfield, Massachusetts.

The House bill would create a public tender through which any casino operator could bid on the right to operate a gaming venue anywhere in the state, including in its southern corner, which is tantalizingly close to the massive throngs of humanity in New York City.

Regardless of whether either bill will eventually be approved by both state legislatures and signed into law by a reluctant Gov. Dannel Malloy, the courts will likely have the final say. MGM says the tribal bill violates the US Constitution because no other operators were allowed to bid on the project, while the tribes could tear up their slots revenue sharing deal with the state if their slots exclusivity is undermined by the addition of commercial casino operators.

The thorny legal issues surrounding these bills were the subject of an eight-page opinion released Monday by state Attorney General George Jepsen, who concluded that the situation was simply too murky to offer any certainty on how long either house of cards might stand.

Rep. Linda Orange said Wednesday’s pass-the-buck committee vote was the right thing to do because the matter is “a much bigger issue than the Public Safety Committee” and thus “the conversation needs to continue.”

One of the lone dissenting voices on Wednesday was Rep. Daniel Rovero, who said Jepsen’s uncertainty should have been sufficient to strangle both casino bills in their cribs and thus avoid further unnecessary grief.