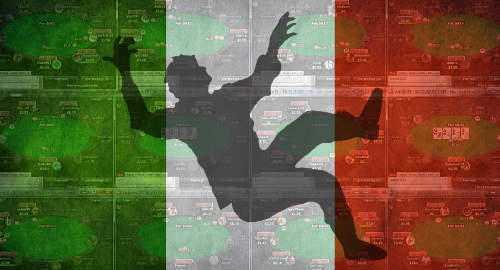 According to figures compiled by Italy’s Agimeg.it gaming news agency, online sports betting turnover topped €432m last month, while land-based wagers were well back at €394m. The combined total of €828m was 30% higher than the same month last year and 7% more than January’s €775m.

The online casino vertical also enjoyed stellar growth in February, with revenue rising nearly 25% to €41.1m. Here too, the operator rankings were unchanged from January, with Lottomatica out front with a 10.7% share of the total, followed by Sisal (8.6%), Amaya Gaming’s PokerStars (8.3%), Bwin (6.4%) and Snai (6.1%).

Sisal’s share of the casino pie has grown nearly one-third since February 2016, while PokerStars is up 28.6% year-on-year. Contrast that with William Hill, which has seen its casino share fall more than one-quarter over the past 12 months.

Speaking of losers, Italy’s online poker market continued to die on the vine, with February’s tournament fees falling 16.5% from January while cash games were down 11%. PokerStars is still the unquestioned leader in both categories, although its tournament share slipped about five points to 42.5% and its cash game share fell two points to 69.2%.

The Italian government recently released its final, official figures for the country’s gambling market in 2016, which showed total gambling spending of €19.17b, a gain of 11.4% over 2015’s total. More than half of this sum (€10.5m) came via Italy’s ubiquitous gaming machines, a 10% year-on-year gain.

Finally, as proof that the real house always wins, the government’s share of 2016’s gambling bounty was up nearly one-quarter to €10.1b, while player winnings increased a more modest 8.2% to €76.8m.