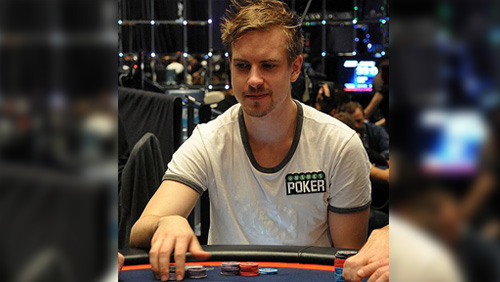 Viktor Blom resumes his relationship with Unibet with a planned appearance at the Unibet Open London.

The live tournament scene is thriving. PokerStars has the shiny new PokerStars Championships and Festivals. Partypoker has the Grand Prix Poker Tour (GPPT), Millions and MILLIONS events. 888 recently upped their ante by adding the 888Live tour to 888Live Local. Microgaming Poker Network (MPN) has a Poker Tour, which by all accounts, is exceptional, and then you have the World Poker Tour (WPT) and World Series of Poker (WSOP).

The challenge for all of these events is how to find the right blend of action for the grinders and the recreational players looking to have a dabble in a live setting for the first time, and Unibet is one of the tour operators that seem to have it licked.

2016 was another successful year for the Unibet Open culminating with an ambitious €500,000 Guaranteed €1,100 buy-in event in Bucharest. It was the first time Unibet had hosted an event in Romania, but with such a strong team behind them, they managed to put on a record-breaking event that attracted 603 entrants and rewarded Traian Bostan with a €100,000 first prize.

The 2017 tour begins with a five-day festival taking place above the Grosvenor Victoria Casino in London Feb 22-26. There will be 11-events including the £990 Main Event and £2,020 High Roller. 200 players have already qualified for the big one playing online at Unibet.

During the recent 888Live King’s Festival in Rozvadov, the online poker room hosted a grudge match between the pair who clashed in ESPN’s coverage of the World Series of Poker (WSOP) – Will Kassouf and Stacy Matuson (which Matuson won).

Unibet has gone one better, by inviting both Kassouf and former November Niner Griffin Benger to the Unibet Open London. It was Benger who ended Kassouf’s run in that classic AA v KK cooler of a hand that went viral in the days after ESPN aired it.

And Viktor ‘Isildur1′ Blom will reconvene his relationship with Unibet by appearing in a special eSports Battle Royale. Nine eSports athletes and nine Unibet Ambassadors will square off in two £10,000 freerolls to determine the best Unibet eSports player and the Unibet Ambassador, and Blom will compete in both. 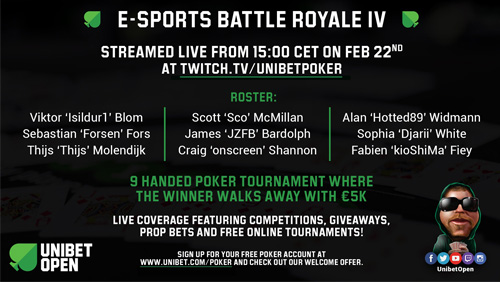 Blom first worked with Unibet in May 2015 when he competed in the Unibet Poker Live Cash Game alongside the likes of Betting Emporium owner and former Irish Open winner Neil Channing, ice hockey star Esa Tikkanen, and the former Man Utd and England striker Teddy Sheringham.

You can catch the action from London on Unibet’s Twitch Channel.