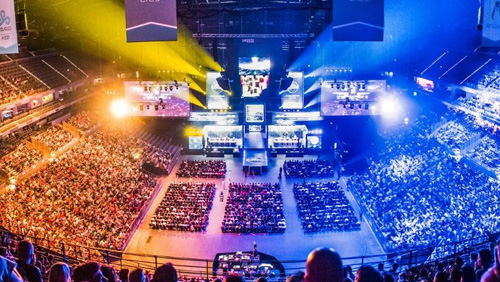 
A sporting event just isn’t a sporting event without the ability to have a sensible wager and eSports is no different. It might be the new kid on the block, but it won’t be long before it finds a seat on the thrones reserved for the likes of soccer and horse racing.

I know it looks like a random photograph of four people protecting their vulnerability, but these are four of the smartest cookies in the eSports and gambling world, who together, have formed the Nevada eSports Alliance (NVEA).

NVEA is a non-profit with the goal of ensuring when eSports hits Las Vegas in a big way, it’s done in a legal and fair way. The team consists of Downtown Grand Chairman, Seth Schorr, Brett Abarbanel of UNLV’s International Gaming Institute, Chris Grove of Narus Advisors, and Jennifer Roberts of UNLV’s International Center for Gaming Regulation.

The NVEA has a difficult job on their hands acting as a support to casino partners providing value to old fogeys mindlessly pushing slot machine buttons. The Millenials are a very different breed.

Early adopters of the NVEA include the eSports Integrity Coalition (ESIC), GameCo, Narus Advisors, Unikrn, and the US arm of the bookie William Hill. Hills took the first-ever wager on an eSports event in November at the IEM Oakland League of Legends tournament.

Las Vegas is expected to host over a dozen eSports events in 2017, and NVEA believes they will attract around 100,000 people to sin city.

William Hill to Offer a Book for DreamHack Masters

The Nevada Gaming Control Board (NGCB) has given Williams Hills the thumbs up to create a betting market at next week’s DreamHack Masters Las Vegas eSports event.

The Swedish team Ninjas in Pyjamas (NiP) won the last Dreamhack Masters event in Malmo. You can pick them up for 12/1 to go back-to-back.

Wagers can be made on Hills mobile app or at any William Hills sportsbook in the state.