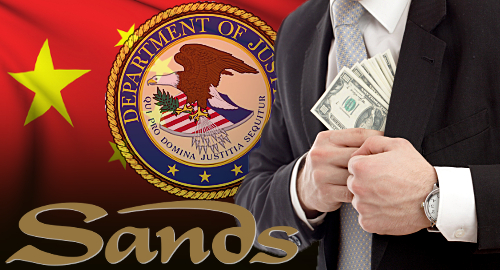 Casino operator Las Vegas Sands has agreed to pay a nearly $7m fine to resolve a US federal probe into its activities in China and Macau.

On Thursday, the Department of Justice announced that Sands had agreed to pay $6.96m to resolve the investigation into Sands’ violations of the Foreign Corrupt Practices Act (FCPA) in its business transactions in China and Macau. The FCPA prohibits US companies from bribing foreign officials in order to win business concessions.

The payment is in addition to the $9m civil penalty Sands paid last April to resolve a similar probe by the US Securities Exchange Commission (SEC) that determined the casino operator had little documentation to explain why it paid $62m to an Asian consultant.

The consultant reportedly acted as a ‘beard’ for Sands’ purchases of Chinese companies and property – including $6m for a basketball team that gambling companies were prohibited from owning – and which some Sands staff suspected were purchased “solely for political purposes.”

The DOJ said its probe determined that Sands paid the consultant around $5.8m between 2006 and 2009 that even Sands admitted had been issued “without any discernable legitimate business purpose.”

As part of a non-prosecution agreement, Sands also admitted that some of its executives “knowingly and willfully” failed to impose the necessary controls in its dealings with the consultant. Sands continued to funnel money to their beard despite warnings from its finance staff and an outside auditor that the payments were sketchy as hell. In fact, Sands sacked the finance department employee who raised concerns about the payments. (Perhaps Steven Jacobs could advise this sacked staffer on the appropriate legal response.)

Despite all these shortcomings, Sands’ fine is 25% below the bare minimum called for in US Sentencing Guidelines. The DOJ says it cut Sands some slack because the company “fully cooperated in the investigation and fully remediated.” Sands is apparently also really, really, sorry about the whole silly mix-up. Really.

The $7m is more than the $2m that Nevada regulators fined Sands for the same shenanigans but it pales in comparison to the $47.4m Sands paid in 2013 for not being overly interested in where an alleged methamphetamine supplier earned the cash he blew at Sands’ gaming tables.

Whatever the monetary punishment, it’s peanuts to Sands boss and occasional Bond villain Sheldon Adelson, whose net worth hit $30.3b in 2016, according to the latest Forbes rich list. In fact, Adelson enjoyed the seventh-highest increase (+$5.6b) in his net worth last year.

Sands isn’t completely off the legal hook in the US. Last October, the Nevada Gaming Control Board revealed it was investigating Sands’ use of ‘shills’ – average people who agreed to pose as fronts for Chinese high-rollers who don’t want Beijing to know that they’re making it rain at Sands’ Vegas properties, which would be a(nother) blatant violation of Sands’ Nevada gaming license. Somehow, we doubt Adelson is losing too much sleep over the outcome.