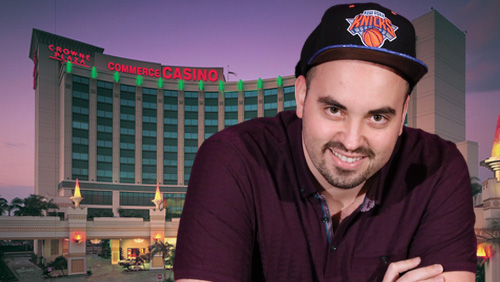 Commerce Casino in California is the new sponsor for the Card Player Player of the Year, and the early leader in the 2017 race is Bryn Kenney. The Global Poker League, New York Rounders manager, won the $50,000 Single Day High Roller at the PokerStars Championship in the Bahamas.

Card Player has a new sponsor for their annual Player of the Year (POY) race. The Commerce Hotel & Casino in California will slap their bourgeois brand on the tin for the 2017 campaign.

Boasting 160 tables, Commerce Casino is the largest poker room in the world (The Rio smashes it once a year), and news of the hook up comes in the build up to one of their busiest times of the live tournament calendar.

Commerce will host the LA Poker Classic beginning January 13th with a $175 buy-in LAPC Kickoff No Limit-Hold’em Double Stack event. The opening event has a $100,000 guarantee, and the action takes place over two days. The festival runs until March 2.

David Peters spared us the annual Global Poker Index (GPI) Player of the Year (POY) vs. Card Player POY squabble after winning both awards in 2016, but for the Card Player team, there is no squabble to be had.

Created in 1997, the first winner of the Card Player POY title was Men Nguyen, who then went on to win another three times, a record unequalled.

The very early leader in the 2017 Card Player POY race is Bryn Kenney. The Global Poker League (GPL) New York Rounders Team Manager sits on top of the leaderboard after taking down the PokerStars Championship $50,000 Single Day High Roller in The Bahamas for $969,075.

Daniel Dvoress, Byron Kaverman, and Daniel Colman also made the final tables of both premier events.

The poker world was buzzing a few days ago when Kevin Hart decided to swap Hollywood for the poker table when he fired two bullets in the $100k event. Hart didn’t stop there. The American comedian and actor fired another two shots in the $50k before hopping into the PokerStars Championship Main Event.

And Hart wasn’t the only non-poker celebrity who happened to be kicking it back in the Bahamas. Breaking Bad and The Path star, Aaron Paul, made it through to Day 2 in the Main Event. You may remember that Paul was the only player to survive the Global Poker League (GPL) undefeated where he represented the LA Sunset, although he only played two matches.