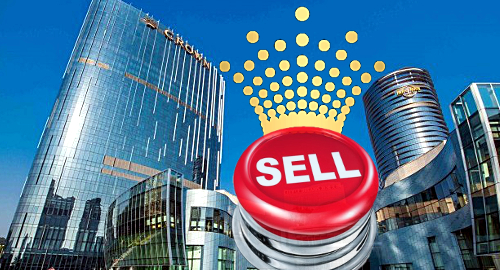 On Wednesday, Crown sought a halt in trading in its shares on the Australian Stock Exchange after alerting investors that it was selling 198m shares in the MCE joint venture to Hong Kong-listed developer Melco International Development, which is owned by MCE CEO Lawrence Ho.

The sale represents 13.4% of outstanding shares in MCE, which operates casinos in Macau and Manila. Crown said it expects the sale to realize a payday of around A$1.6b (US $1.2b), “subject to upward adjustments for interest” if the deal isn’t closed by March 1, 2017.

Crown plans to use half of its windfall to pay down its net debt. Another A$500m will be returned to shareholders via a special distribution, while the remaining A$300m will enable a share buy-back program.

Wednesday’s sale reduces Crown’s MCE stake to 14%. Crown sold 155m MCE shares in May, which reduced its stake in the joint venture to 27.4% from 34.3%. Following Wednesday’s deal, Melco’s share of MCE will surge from 37.9% to 51.3%, giving Lawrence Ho majority control of MCE for the first time.

The transaction required some shifting on MCE’s board, with Melco’s seats rising from three to four, while Crown’s representation will fall from two to one. James Packer, Crown’s largest shareholder and former chairman, will resign his MCE seat as of Thursday. Packer holds 48% of Crown and will personally realize A$240m from the MCE sale.

SO LONG, ALON
Crown also announced that it won’t be proceeding with its Alon project in Las Vegas, following “an extensive review of funding alternatives.” As early as last December, Crown was already having difficulty finding bankers willing to sink $1.9b into Packer’s second attempt at establishing a Nevada footprint.

With Alon not going forward, Crown and its partners are now “exploring alternatives to optimize the value of their investment in Alon, including an outright sale.”

DEMERGER OFF THE TABLE
Wednesday’s activity also means that Crown will definitely not be proceeding with its plan to demerge its Australian and international divisions. Two weeks ago, Crown put the demerger plans on pause, a move reportedly prompted by the uncertainty regarding the fate of the Crown execs arrested in China in October for allegedly promoting gambling activity to mainland VIPs.

On Wednesday, Crown CEO Rowen Craigie said the decision to scrap the demerger “represents a prudent alternative” to proceeding as planned. However, the plan to form a publicly traded real estate investment trust to own the land on which Crown’s domestic resorts stand will go ahead.

PROGNOSIS NEGATIVE
Craigie also promised to provide investors with “greater transparency in respect of the Company’s asset portfolio.” To that end, the company offered a trading update through the first half of its fiscal 2017, and it wasn’t pretty.

Crown says VIP turnover at its Australian properties is down around 45% from the same period a year ago, but claims that this is partly due to VIP activity in Q1 FY16 having been “extremely strong.” Main floor gaming revenue was flat, non-gaming revenue rose 4%, but overall revenue is off 12%, primarily to the aforementioned VIP suckiness.