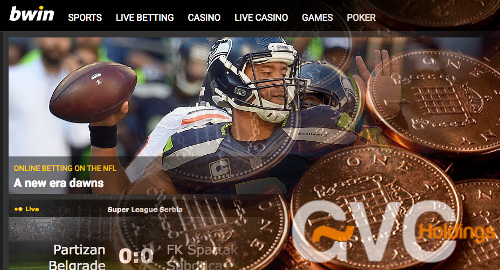 On Thursday, GVC announced that it had enjoyed continued “strong trading performance” through Q4 2016, allowing the company to project that its full year earnings will come in at the upper end of market expectations.

GVC says pro forma group daily net gaming revenue in Q4 through December 12 is up 12% over the same period last year, with sports betting revenue up 19% and gaming/other up 8%. GVC says the positive comparison is all the more impressive given that December was GVC’s strongest month in 2015.

As a result of this good fortune, GVC announced that it was boosting the special dividend it proposed in November. The previously announced per share dividend of €10¢ will rise 49% to €14.9¢. The dividend payment will be settled in sterling at 12.5p per share.

GVC CEO Kenneth Alexander said the positive momentum was “a reflection of the hard work of our employees, quality of our technology and strength of our brands.” The integration of Bwin.party, which GVC acquired in September 2015, is “proceeding positively and ahead of our original expectations.”

THAT WAS QUICK
The integration of Bwin.party must be going swimmingly, as GVC was reportedly already in the hunt for another major tie-up with a UK rival. Last Friday, the Financial Times reported that GVC was in talks with Ladbrokes-Coral Group on a reverse takeover that valued the only recently combined Ladbrokes and Gala Coral entity at £3.2b. Both companies’ share prices got a corresponding bump.

But by Monday, these takeover rumors were already toast, and both GVC and Ladbrokes-Coral shares took a tumble. It’s unclear how serious the deal talks ever were, but Ladbrokes and Coral are still mired in their own integration headache, leading many analysts to suggest there would be no more talk of mergers at least until mid-2017 when the dreaded ‘synergies’ bloodletting is behind them.

The wave of consolidation sweeping the UK online market has prompted rumors of deals involving both GVC and Ladbrokes-Coral in recent months. Last month, Ladbrokes-Coral were reportedly making a play to acquire Australian betting operator Tabcorp Holdings, while GVC was said to be teaming with UK bookie William Hill on a joint bid to acquire Canada’s Amaya Gaming, the parent company of PokerStars.