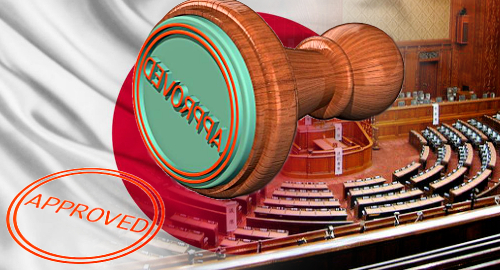 The Diet’s upper house approved the Integrated Resorts Promotion (IR) bill in a plenary session that extended into Wednesday night. The bill, which underwent amendments during the upper house debate, must now by law return to the lower house for rubber-stamping.

Wednesday marked the final day of the Diet’s extraordinary session, but the ruling Liberal Democratic Party (LDP) voted to extend the session by three days to ensure the IR bill wouldn’t fall victim to procedural restrictions. The amended IR bill is expected to be approved by the lower house on Thursday morning.

The upper house vote came despite a joint no-confidence motion filed by four opposition parties – the Democratic Party, Japanese Communist Party, the Liberal Party and the Social Democratic Party – that was ultimately vetoed by the LDP. The motion injected further delays into the process, leading the LDP to push for the session extension, which was supported by the lower house.

The LDP sought to assuage the opposition parties’ concerns by amending the bill to define the government’s role in combatting gambling addiction, while also agreeing to formally review the casino legislation within five years of its enactment.

The LDP has identified the construction of at least two integrated resorts as a means of giving the local economy a badly needed shot in the arm. Prime Minister Shinzo Abe said last week that casinos will help Japan realize its goal of doubling annual international tourist visitation.

The IR bill has been dubbed an ‘enabling’ bill, in that its sole purpose is to remove the ban on casino gambling from Japan’s constitution. Following the IR bill’s enactment, Japan will have one year in which to craft secondary legislation that will spell out casino regulation, taxation, the number of casinos and which cities will host them.

Japan’s casino tender is expected to be a savage affair, as nearly every international casino operator worth its salt has pledged to make a full court press to win one of the prized casino concessions.