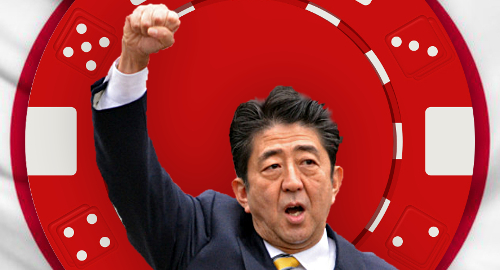 Japan’s Prime Minister Shinzo Abe is defending his party’s push to bring legal casino gambling to the land of the rising sun.

After three years of stasis, Japanese lawmakers pushed their Integrated Resorts Promotion (IR) bill through the Diet’s lower house on Tuesday. The bill has now been sent to the upper house for committee debate ahead of a possible vote as early as Friday.

Pro-casino legislators are trying to push the bill over the top before the Diet’s current session concludes on December 14. But the speed with which the IR bill is progressing has left many legislators, including some in Abe’s Liberal Democratic Party (LDP), complaining that insufficient debate is being held on such a weighty subject.

On Wednesday, Abe (pictured) was in the Diet, where he responded to pointed criticism from Democratic Progressive Party (DPP) chief Renho Murata, who said Abe’s claims that he hadn’t “steamrolled” the IR bill meant “you lie just [as easily] as you breathe.”

Abe said he wasn’t “a dictator” and emphasized the lengths to which the LDP had gone to bring opposition parties on board with the casino plan. Abe also noted that international tourist numbers had more than doubled to 20m per year under his administration, and the casinos were necessary to realize the LDP’s goal of boosting that annual tourist figure to 40m.

The LDP has vowed to give the IR bill more scrutiny in the upper house and gaming analysts believe the upper house’s approval will be harder to achieve. While the LDP holds a slim majority (11 of 20 members) on the committee that will consider the IR bill, the committee is chaired by Namba Shoji, a member of the DPP, whose membership dramatically walked out of the lower house to protest this week’s casino vote.

Union Gaming Securities issued a note saying the LDP “will clearly need to bargain” with Shoji to convince him to allow a vote on the IR bill. But assuming the bill gets past Shoji, the LDP holds an outright majority in the upper house, and the bill would likely pass without incident.

The IR bill would eliminate the constitutional ban on casino gambling, after which legislators would have one year in which to craft an implementation bill that would codify the nuts and bolts of casino regulation, including how many casinos will be built and where they will go.