Home / Casino / In Cambodia, a casino’s house edge can be a knife blade 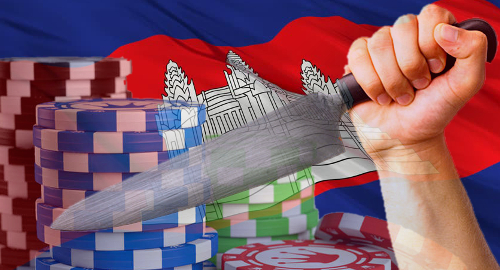 All casinos have a built-in house edge, but in Cambodia that edge can actually draw blood.

On Wednesday, police in the Cambodian city of Sihanoukville arrested two Chinese employees of the Leu Phnom Casino for stabbing and robbing two other Chinese nationals. The Khmer Times quoted the local police chief saying the four men were known to each other prior to the attack.

The two 22-year-old casino staffers reportedly tried their hand at the other side of the gambling table, only to go broke in the process. Short of cash, they decided to rob their countrymen, who were sleeping in the casino’s staff quarters at the time.

Awakened at knifepoint, the two victims resisted, only to be stabbed in the arm and back when they didn’t make with the money fast enough. The staff/thieves relieved their friends/victims of around $3k in cash as well as a laptop. The laptop and around $1,100 of the stolen cash were reportedly retrieved by the police following the arrests of the perpetrators.

Meanwhile, police in Svan Rieng province have arrested a casino employee in Bavet for kidnapping a gambler and extorting money from the man’s family. The victim, a Vietnamese national, lost all his money gambling at the unidentified casino, so he borrowed VND 100m (US $4,400) from the casino’s in-house lender, who was also Vietnamese.

The gambler (surprise!) proceeded to lose the money he borrowed, leaving him with no way to repay the loan. The lender, along with two other individuals, detained the gambler at a guesthouse in Bavet, then called the gambler’s family in Vietnam demanding they make good on their relative’s debts.

The gambler’s family contacted Cambodian police, who were able to track down the dwelling in which the gambler was being held. The lender/kidnapper was arrested, after which his two accomplices fled. The lender has been charged with unlawful confinement and extortion, opening him up to a potential five-year prison sentence.

Vietnam doesn’t (yet) allow its citizens to gamble in domestic casinos, which results in them patronizing the numerous small casinos that lie just over the border in Cambodia. Similar loan/kidnapping/extortion stories routinely emerge from these casinos, including a case in Bavet this March that resulted in the murder of a Vietnamese man.