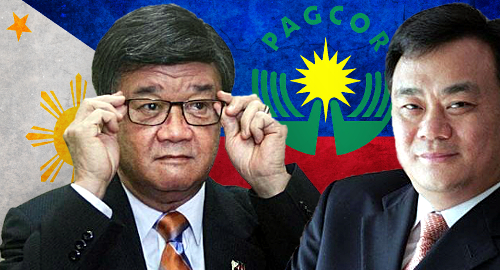 The Philippines top law enforcement official has accused gambling operator Jack Lam of attempting to bribe both himself and the head of the country’s gaming regulatory agency.

On Wednesday, the Inquirer quoted Aguirre directly accusing Lam (pictured right), the operator of the Fontana Casino in Clark Freeport and the founder of Macau junket operator Jimei Group, of attempting to bribe him two days following the arrests of the Chinese online gambling workers.

Aguirre said the bribe was offered via two interpreters and former police officer Wally Sombrero during a meeting with Lam at Bonifacio Global City. Lam reportedly told Aguirre that he was looking for a ‘ninong’ aka godfather to protect his Philippine gambling operations, which include the Ford Ilocandia casino in Ilocos Norte province and the online gambling business at the Fontana venue.

Aguirre said he immediately rejected Lam’s overtures, which Aguirre claimed “could easily mean P100m (US $2m) per month,” because the Philippines government “are serious in fighting corruption.”

Aguirre also said he warned Lam to stop bribing Bureau of Immigration (BI) officials for the release of the 1,316 Chinese nationals. On Tuesday, Aguirre said BI officials had been offered P200k per head for each worker’s release.

On Wednesday, Aguirre said Lam had spent at least P70m ($1.4m) paying off BI agents for some of the workers’ release. Aguirre promised “heads will roll at the BI” once the final report on the affair is delivered.

Aguirre further claimed that Lam had made similar overtures to Andrea Domingo, the chair of the Philippine Amusement and Gaming Corporation. Aguirre said Domingo had informed him that Lam offered her a 1% cut of his gambling earnings if she would allow his unauthorized online gambling site to continue to function while Lam applied for one of the new PAGCOR Offshore Gambling Operator (POGO) licenses.

Aguirre said Domingo “lost all interest in talking to Lam after that. She just told Lam to pay the government’s 10% cut from his casino earnings and that he should first get a license before running online gaming operations in the country.”

Lam’s online activities were flagged as illegal in a Manila Times op-ed in April 2015, which also accused Lam of illegally issuing “sub-licenses” to other Chinese-facing online operators. The Fontana property reportedly offered telephone proxy betting to VIP gamblers on the Chinese mainland. In January, Frontier Capital Group said it was looking to launch proxy betting from its Casablanca Casino in Clark Freeport.