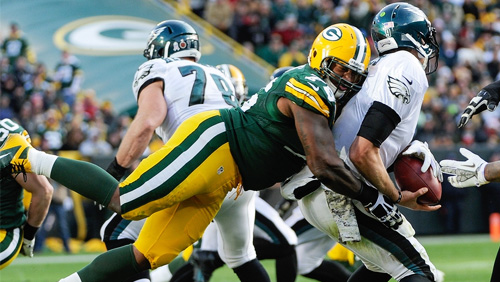 The Eagles are listed as the four-point favorite against the Packers with a 47.5-point total. Philadelphia in recent years has been masterful on Mondays, going 5-1 straight-up and against the spread in their last six Monday games. The Packers have had issues beating teams twice in a row, going 0-4 SU and 1-3 ATS in their last four games after winning the previous game in a matchup.

Green Bay is 4-6 SU and 3-6-1 ATS, due largely to a defense which has allowed at least 30 points in four consecutive games. The Eagles, meantime, have allowed only 38 points in four games.

With an average offensive line which will have to negate top defenders such as DT Fletcher Cox and MLB Jordan Hicks, the Packers might struggle to open holes for RB James Starks. In the passing phase, the Eagles are waiting to see if top CB Leodis McKelvin will play, but overall, Rodgers, WR Jordy Nelson and WR Randall Cobb have had to be much more deliberate with their pass distribution.

The Packers are 6-1 ATS in their last seven road games after failing to cover in their past two road games, but this is a different team.

Philadelphia is 5-5 SU and ATS as it faces questions about Wentz’s accuracy and what kind of rushing attack they can marshal if RB Darren Sproles (rib) and RB Ryan Mathews (knee) cannot play. The Eagles also have a guard, Allen Barbre, installed at right tackle – across from dangerous pass rusher Nick Perry – after an injury to Halapoulivaati Vaitai. However, the Packers defense is the much more banged-up unit. Even if Damarious Randall (groin) returns, the Packers are thin at cornerback and there should be some chances for WR Dorial Green-Beckham and WR Jordan Matthews to have an impact.

The Eagles who are 5-2 SU and ATS in their last seven home games against sub-.500 teams, might have to entrust the ball-carrying to rookie Wendell Smallwood. However, injuries to ILBs Blake Martinez (knee) and Jake Ryan (ankle) could also weaken the Packers’ run defense.