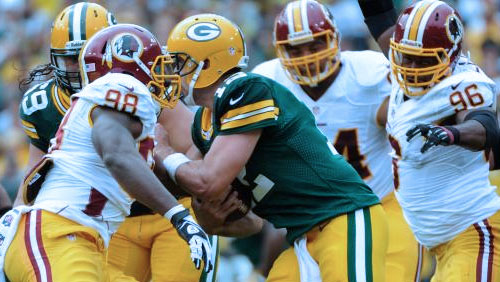 Kirk Cousins and the Washington Redskins are just a slim favorite against Aaron Rodgers and the Green Bay Packers, even though they have been trending in a much more positive direction.

Washington is listed as the three-point favorite against visiting Green Bay with a 50.5 total. The Packers are listed at -125 to cover, while the Redskins pay +105 if they reward backers by beating the spread. Washington has won four of their last five games and Green Bay, conversely, has lost four of five, but the Redskins are only 2-8 against the spread in their last 10 games as the favorite.

The Packers, who are 4-5 straight-up and 3-5-1 ATS, have had by far the better of this matchup with a 7-1-1 ATS record in their last nine games against Washington. That includes a wild-card playoff win at FedExField last season.

Rodgers can never be counted out, but the Packers are struggling to stretch opposing secondaries with the deep pass. Green Bay will try to get WR Jordy Nelson into the same matchups Minnesota’s Stefon Diggs had against Washington in Week 10, when he put up 164 receiving yards against Washington. Washington’s front seven has 25 sacks this season.

Washington allows 4.6 yards per carry (28th in the NFL), which could be a boon to the struggling Packers’ running game.

For the Redskins, who are 5-3-1 SU and 6-3-1 ATS, success starts with keeping Cousins upright. Washington, which is counting on RT Morgan Moses (ankle) to stay healthy and handle Packers OLB Nick Perry, has allowed only 12 sacks in nine games.

Washington’s potency in the passing game will be somewhat predicated on whether deep threat DeSean Jackson (shoulder) is able to play, which could open up intermediate-range routes for WR Jamison Crowder and TE Jordan Reed.