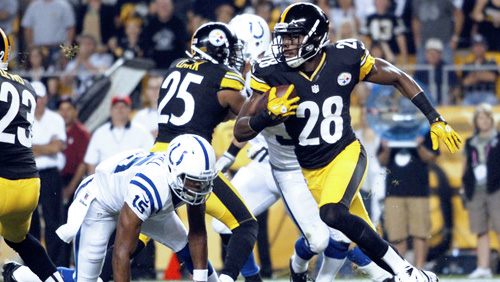 Ben Roethlisberger and the Pittsburgh Steelers have been offensively inefficient on the road of late, which should not be overlooked regardless of who the Indianapolis Colts have at quarterback on Thursday night.

Colts quarterback Andrew Luck is unlikely to complete concussion protocol in time to play and backup Scott Tolzien, who has not taken a snap all season, is in line to make his third career start. The Steelers opened as a three-point favorite but now sit as a 9-point favorite for Thursday night. The total for the game is listed at 48 points.

The Steelers are only 2-8 against the spread in their last 10 November games. Also, Pittsburgh has not scored more than two offensive touchdowns in a road game this season since Week 1.

Pittsburgh, which is 5-5 straight-up and ATS this season, does have a favorable matchup. The Colts are 26th in the NFL in points allowed and their best pass defender, CB Vontae Davis (ankle), might be hobbled. The Colts struggle at covering opponents’ top wide receiver and running back, so Roethlisberger might have ample opportunity to go to WR Antonio Brown and RB Le’Veon Bell.

It could be a case where the only thing that can stop Pittsburgh is Pittsburgh. The Steelers are 5-0 SU and 4-1 ATS in their last five games against AFC South teams.

Given that it’s a short week, it’s fair to expect that the Colts would simplify their offense if Tolzien plays. That could aid Pittsburgh in deciding how to blitz the likes of DE Stephon Tuitt against an offensive line which has allowed a league-most 35 sacks. Tolzien will also have to get on the same page with WR T.Y. Hilton.

Through veteran Frank Gore, the Colts should be able to get some traction in the rushing phase. The Steelers have had issues with containing the run and the season-ending injury to DT Cameron Heyward has exposed some of their shortcomings.