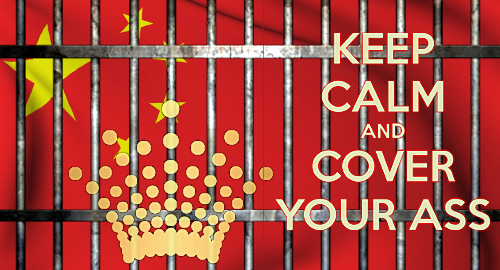 In October, mainland Chinese authorities arrested 18 Crown staffers, including three Australian nationals, for allegedly promoting gambling activity at Crown casinos to Chinese VIPs. While one staffer has been released, the others were formally arrested this week and are now awaiting trial on as-yet unspecified charges.

On Friday, Fairfax Media reported that Crown had hired pricey law firm Minter Ellison to determine the company’s exposure to lawsuits or class actions from relatives of the accused and angry shareholders who saw Crown’s share price tumble following news of the arrests. A ‘senior Crown figure’ characterized the legal review “an act of corporate, legal and reputational arse-covering of the first order.”

A different source claimed Crown management had belatedly realized that it had “failed massively in its duty of care” to its employees and shareholders. The source said paper trails would prove that Crown managers “knew China had warned them not to market into China.”

Crown certainly can’t plead ignorance of China’s position. In February 2015, China’s feared Ministry of Public Security publicly warned that it planned to crack down on international casino operators who’d “set up offices in China to attract and drum up interest from Chinese citizens to go abroad and gamble.”

Earlier this month, a Macau junket operator claimed that Crown had been “too aggressive” in direct marketing to China’s VIPs and had deployed a “large-scale” effort on the mainland that was bound to attract the authorities’ attention. Crown has placed heavy emphasis on its international VIP business in recent years, with a preference for direct VIP activity, which avoids the necessity of having to pay junket commissions.

The three Australian nationals currently sweating it out in a Chinese prison include Crown’s head of international VIP operations Jason O’Connor, Beijing-based director of international VIP marketing Jerry Xuan and Pan Dan. Given that Chinese trials have a 99% conviction rate, it appears almost certain that the Crown staffers won’t be leaving the country anytime soon.