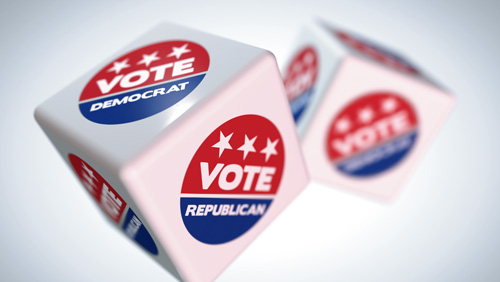 With only a day left before Election Day, the wild and unpredictable 2016 U.S. presidential election is about to add another distinction as the most wagered upon political event in history.

It’s a tight race between Democratic nominee Hillary and Republican Donald Trump, with many opinion polls showing Trump closing the gap following FBI’s announcement that they were reviewing the former secretary of state’s emails. On Sunday, the FBI director said the inquiry has ended and they found nothing that will change the bureau’s original conclusion, effectively lifting a dark cloud that has been hanging over Clinton’s campaign.

But with the final polls trickling in, FBI’s announcement may not have as much of an impact as some experts believe. According to a new NBC News/Wall Street Journal national poll, Clinton retains a modest national lead of 44 percent compared to Trump’s 40 percent.

Clinton and Trump may be considered to be the least popular presidential candidates in the history of American politics, but that’s not stopping bettors from pouring in a record number of wagers into online betting sites.

At Bodog, Clinton remains to be a favorite to become the next president of the United States with -550, while Trump trails behind with +350.

Meanwhile, Betfair said roughly $130 million had been traded on its “next president” market—close to surpassing UK’s Brexit event, which has $159 million.

“We think it is because (of) how raw the Brexit (vote) is in people’s minds—they’re not convinced yet that it’s a done deal,” Betfair spokeswoman Naomi Totten told Reuters.

Irish betting site Paddy Power expects the 2016 race to be among the top 10-most traded events on the site, which has seen about $4.38 million bets so far. In fact, the bookmaker already paid some 6,000 British and Irish gamblers who placed their bets on Clinton—a decision they started weeping over immediately after Trump gained a boost in his odds of becoming the first “President Donny.”

Ladbrokes said a little over $6 million had been bet on the 2016 presidential election since the site’s markets on the election opened in 2012.

The three sites all reported an 83 percent probability of a Clinton victory on Tuesday, according to Reuters.