Home / Business / Three Possibilities Post Brexit and How to Play Each 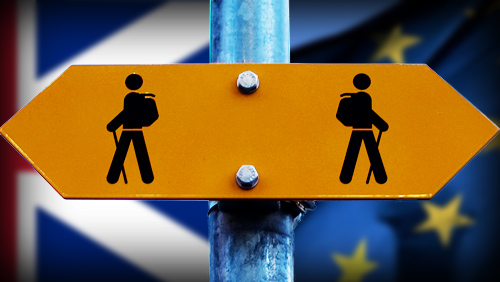 No doubt this is the 50th article you’ve come across trying to pontificate about exactly what is going to happen now that Brexit has passed and exactly how to trade the Brexit. I don’t know exactly what will happen now and neither does anybody else but here are three possibilities from most to least likely, and what should be done if X possibility happens.

Most likely, after a lot of recriminating and yelling, nothing much will change. I can see the United Kingdom drawing up some kind of deal with the rest of the EU that would be practically the same in terms of trade, which is really the only important and only positive aspect of the existence of the European Union. Everything else is just bureaucrats wrangling over how much money each of them get from taxpayers.

We must keep in mind when dealing with politicians, including faux principled ones like Johnson, that they take their positions based on what they believe will bring them more political power, not based on what they believe will give their citizens more liberty or a higher quality of life. If it just so happens that one politician believes he can gain more power by standing against big power centers that a lot of people hate, he’ll do it if he thinks he can win the battle, and then he’ll ally with the power center because the fear of defying it for real is too scary. It’s not like Johnson has any sincere conviction about what is right and wrong and what grows an economy and what doesn’t. He’s just the guy who rode a wave, and now that he has control of it he’ll steer it wherever he likes for his own benefit.

There is no politician that I know of in the UK that really stands for something other than power, not even Nigel Farage who can sometimes seem scrappy, principled and entertaining but I doubt could stand the pressure of a real fight with Brussels that would threaten the British economy. If the EU brought pressure to bear on the UK and really tried to punish it, even Farage would fold. The only possible exception is someone like Godfrey Bloom who looks like he fears nothing, who actually egged on the storming of the European Parliament by the European citizenry and the hanging of every politician there, but he has political Tourette syndrome and he’s out of the picture. If Ron Paul were a nasty, sarcastic big-mouthed anger-driven curmudgeon instead of a quiet respectful puppy-dog gentleman, he’d be Godfrey Bloom. They stand for similar things but Ron Paul successfully ignited a liberty movement, whereas Godfrey Bloom did not.

If Britain ends up signing a trade deal with the remainder of the EU, then now is the time to buy the best companies in proportion to the money growth in each country in which it is based. Here I will do something I’ve never done before since writing for CalvinAyre, and recommend buying a Macau stock. Las Vegas Sands now has a dividend ranging near 7%, and the money supply in China has ticked up slightly with inflation ticking down, lowering the chances of any immediate danger. LVS must be monitored weekly. It’s not a hold and ignore. There are still issues with Chinese crackdowns, but hopefully Sheldon Adelson can get around some of those with his influence and some legal bribery. MGM is also a good buy again and much safer at this point, dropping 15% from its June highs. Money supply in the US is steady in a time that it is normally falling. Now is also a good time to increase positions in good companies even in countries with a falling money supply, so I would buy more 888 on the 20% fall in its stock since topping.

A much less likely possibility is that the remainder of the EU reacts by instinct of self-preservation and integrates itself into a super state with one army. There are some murmurings of this, and it would be the worst of all possible scenarios, more for world safety than for the prospects of economic stability, which would also be bad. When armies get centralized, bad things happen. People tend to forget that the world almost ended in 1962 during the Cuban Missile Crisis because of tensions between two nuclear armies, and tensions between Russia and NATO are flaring up again. A united European army will not help ease tensions, to say the least.

The UK newspaper Express has a piece out now about the unveiling of the EU superstate with one army, one tax system, and one central bank. It may be a piece of far-fetched journalism, but it probably isn’t based on absolutely nothing. If a politically unified Europe happens, there is nothing to do but sell everything, even the best companies, and buy gold and real assets. There may be a plan for this, but the prospect of it going through is very unlikely. Europeans won’t stand for it.

The middle likelihood, which springs from the united Europe plan, is that the plan backfires (assuming there really is one), people are furious about a united European army, and the European Union and the Eurozone completely break apart in the next few weeks. Short term this would be economically disastrous in terms of capital values and stock prices. There would be a period of dollar buying and euro selling as everyone would seek to become liquid at the same time in any currency they thought would survive, not knowing what was going to happen. The Euro would tank and the dollar would skyrocket. This scenario, too, would warrant the total liquidiation of all stocks and the buying of real assets and cash.

The middle likelihood is almost as likely as the EU fully integrating from here. The most likely scenario far outweighs the others in terms of probability. We are most likely to see Britain and the remainder of the EU work out some kind of deal that makes Briton’s think they have left the EU when practically nothing changes. They could symbolically “leave” with Boris Johnson at the helm, while changing nothing except saving face and some vague idea of “British pride”.

At some point the EU will disintegrate and the Euro will be no more, but not yet. Centralized fiat monetary systems cannot last. But at this point it seems the Euro has some time left and we are not at the brink of Armageddon. So it’s time to buy LVS, 888, and MGM, after having sold it on June 7.

Adding a 3% position in LVS.

Adding a 5% position in MGM.

Cash 47%, to be used for a worst case scenario.