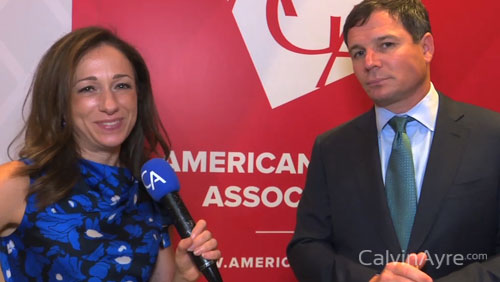 In this interview with CalvinAyre’s Rebecca Liggero,, Geoff Freeman of American Gaming Association explains why he believes the prospects for legalization of sports betting are greater today.

Unlike in the past decades, more Americans are now becoming open in terms of legalizing sports betting in the country.

The data culled by Farleigh Dickinson is a testament – if not proof – to the statement made by Geoff Freeman of American Gaming Association (AGA) that the United States is in a well position to push for the legalization of sports betting in the US.

Freeman pointed out that legalization has been a topic du jour of the industry for several years now. If he is to be asked, Freeman believes that it is a right time for the US to make sports betting legal.

“Daily fantasy sports was the topic last year, a little bit of eSports this year. But the broader issue of sports betting is the constant. I really feel good about the direction of that. The tide is turning pretty quickly,” Freeman told CalvinAyre.com “We are making headway. I think the prospects for legalization of sports betting are greater today than they have ever been.”

What makes him also excited about the prospect of pushing for legalization of sports betting is the fact that all the stakeholders have joined forces to pitch for the new legislation in favor of sports betting.

“I had a chance to spend considerable time with David Stern, with Adam Silver, with others. We have such a diverse coalition, a wide coalition of law enforcement, of leagues, of owners, of broadcasters and advertisers. The folks who wanted to see sports betting legalized is bigger today than it’s ever been,” he said. “And as such, we are going to be well-positioned in the next administration. We had former folks at the FBI, former sheriffs and other now calling for the repeal of PASBA, which sends a powerful message when it comes to law enforcement.”

He, however, said that they are now in a wait-and-see approach especially since the United States will see a new administration by next year. Freeman is also concerned with the outcome of the elections in Congress and Senate.

“It is very unpredictable right now. With Trump, the level of unpredictability is quite high, with Clinton, there’s a background and experience, and it makes it a little bit more predictable. Anyone who tells you what one side means for the industry versus the other, they don’t know what they are talking about,” Freeman explained. “Either way, our industry is well positioned, the presence of this industry in forty states right now, the mainstream nature of this industry, its better position than it’s ever been. So I feel good either way. The question becomes, how do we advance our agenda? We are making a big push to legalize sports betting and what is the environment going to be to do that. I’m more concerned about the House and Senate than the presidential.”