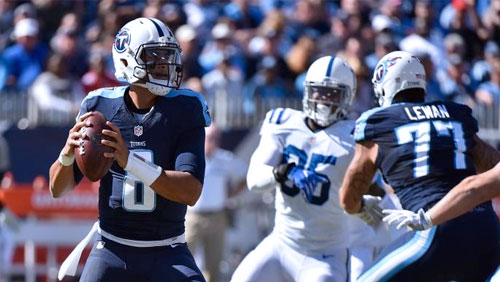 Marcus Mariota has a strong chance of improving his dismal home record with the Tennessee Titans favored against the Jacksonville Jaguars for Thursday night.

Tennessee is listed as the 3.5-point favorite against the underachieving Jaguars with a total of 44. The Titans are a -175 favorite on the moneyline, with the Jaguars at +155.

Tennessee is 3-4 straight-up and 2-5 against the spread, but are only 2-8 SU in games Mariota has started at Nissan Stadium. The second-year QB is struggling with his accuracy, but the short week before Thursday games often makes running the ball more paramount.

With the tandem of DeMarco Murray and Derrick Henry and Mariota running zone reads, Tennessee should be able to get its ground game going.

Another troubling Titans trend is a record of 1-13-1 ATS in their last 15 divisional games. The law of averages suggests that record should improve, since the NFL is parity-driven. To make it happen, Mariota needs to find a reliable target other than TE Delanie Walker.

Jacksonville, which is surrounded by rumours that coach Gus Bradley could be fired, is 2-4 SU and 4-2 ATS. The Jaguars are 4-1 ATS in their last five games as an underdog of 3.5 points or more. The regression of QB Blake Bortles (nine interceptions in six games) raises questions about whether they can turn around that trend.

Tennessee will not have CB Perrish Cox (concussion protocol) or FS Rashad Johnson (neck), but it will take more than a shorthanded opposing secondary for Jacksonville to make full use of WR Allen Hurms and Allen Robinson.

The Jaguars, who lost to the Oakland Raiders last week, are 1-5 SU in games after losing as a favorite. A major stumbling block is a running game that is the third-poorest in the league. Based on form, that might not change since Tennessee, with ILBs Wesley Woodyard and ILB Avery Williamson, is good at containing the run.