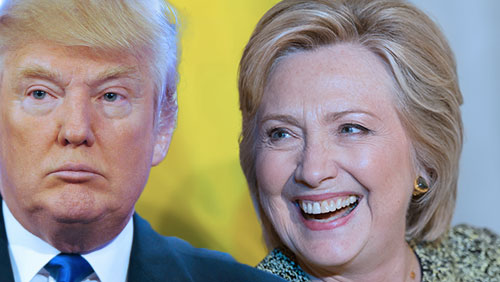 For punters, however, there’s a more important question that needs to be answered: What color will Trump’s tie be?

First, which party will win in the November presidential election? At Bodog, the Democrats’ frontrunner remains to be a favorite at -220 (5/11), while the Republican Party is at +175 (7/4).

The two nominees are scheduled to go head to head in their first presidential debate on Monday night, which is favored to have a higher Nielsen rating at -1000 (1/10) than Monday Night Football, which is at  +550 (11/2).

There will be plenty to watch for on Monday night. Clinton is the first woman nominee of the two major parties, while Trump is the first not currently elected nominee to take part in a presidential debate. But beyond their platforms and incendiary comments, punters are also interested on the candidates’ threads.

Of liars and bigots

There’s a whole host of other prop bets available, including the probabilities that Trump will call Clinton a liar (-220), will refer to his rival as “crooked Hillary” (-200), will mention former President Bill Clinton during the course of the debate (+120), and will say “build the wall” or “build a wall” (-300).