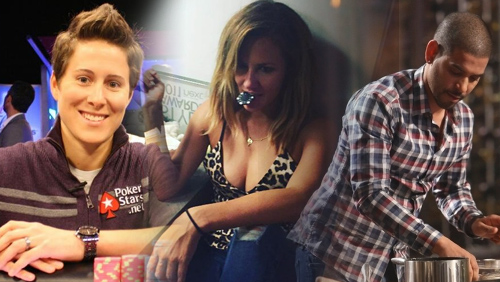 3-Barrels of pure value including Vanessa Selbst readying herself for another charity poker night, a former European Poker Tour host in an Instagram storm, and David Williams explaining why the whole world hates him ahead of the Masterchef Final.

The baddest female poker player on the planet is busting out her second iteration of her Justice is Blinds charity poker night. For the second year running, Vanessa Selbst will be hosting the charity fundraiser with all proceeds heading towards the kitty of The Urban Justice Centre.

The event is due to take place Tuesday, September 27 at the Roman classic 1895 New York landmark Capitale. Poker aside, there will be a magician, an open bar and a vast array of celebrities and professional poker players.

If you want to get involved, then it will cost you $8,000 to fill a table of nine; $1,000 to enter the charity poker contest, $500 if you want to skip the poker and $1,000 for a VIP Cocktail Hour with both Selbst and Daniel Negreanu. The PokerStars figurehead will be on hand to support Selbst for the second successive year.

The winner of the charity tournament will win a $11,000 package to the PokerStars Championships in the Bahamas in January 2017. Other gift-wrapped goodies include a trip anywhere in the continental US, tickets for a New York Jets v Miami Dolphins game, box seats for an NBA game at Madison Square Garden, a round of golf and lunch at Baltusrol, and of course free poker lessons from some of the games finest.

Last year, 200 people attended the event, with 135 of them taking part in the poker tournament. The event raised $160,000 for the Urban Justice Centre. Daniel Negreanu finished seventh in the event. Andy Frankenberger was fifth.

Former European Poker Tour (EPT) host Caroline Flack caused a twister of turbulence on Twitter after posting a photo of her local poker night. The television host voted FHM’s 5th Most Sexiest Women, last year, was seen posing with a poker chip in her mouth, but for once, the focus of attention was not her.

One of her eagle-eyed social media followers noticed a credit card, vaseline and what appeared to be a rolled-up note laying on the table beside her prompting some of her followers to suggest it was the type of paraphernalia used for snorting the white stuff.

Flack, 36, quickly deleted the comments, and later posted a second snap showing that the rolled up note was, in fact, a child’s pen stating, “It’s a pen you twits”, and “thank god no one asked what I use the Vaseline for…MY LIPS PEOPLE…MY LIPS.”

Flack worked alongside Colin Murray on Seasons 1-3 of Channel 4’s coverage of the EPT until Kara Scott replaced her for Season 4. Flack has over 1 million followers on Instagram and 1.9m followers on Twitter.

One of the players in Caroline Flack’s poker game was David Walliams, who shouldn’t be confused with the former PokerStars Team Pro David Williams.

The latter wasn’t at Caroline Flack’s kids crayon colouring and poker night because he was busy warming up for his appearance in the final of Masterchef.

The man with over $8.6m in live tournament cashes is down to the final three contestants and decided to air his thoughts on why the ‘entire world’ is rooting against him in a blog post, on Facebook.

In the blog post, Williams talks about the difficulty of being away from his family for the 50 days of filming, and how the reality TV show isn’t really ‘reality’ and is instead over 12 hours of filming condensed into one 45-minute episode. Williams also touches upon his infamous walkout, and praises the show’s host Gordon Ramsey for ‘talking him down off a ledge.’

The Season 7 finale pits Williams against fifth-grade teacher Brandi Mudd, and DJ Shaun O’Neale. Wolfgang Puck will be amongst the judges. The winner walks away with $250,000 and a personalised cookbook.