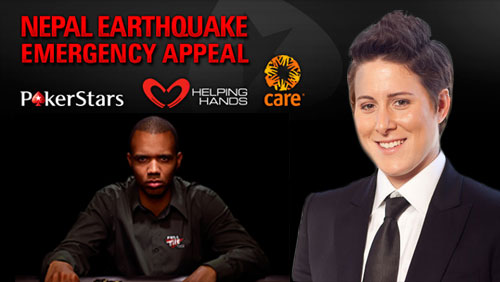 Lee Davy covers three stories with a PokerStars theme as Vanessa Selbst organizes the Blinds for Justice charity event in New York, PokerStars reveal they raised over half a million dollars for the Nepal Earthquake fund, and Phil Ivey wins the biggest pot of the year on PokerStars.

Three PokerStars themed news stories to get you up to speed on, and we will start with some sterling work from one of their own.

When Team PokerStars Pro, Vanessa Selbst, isn’t studying for bar exams, or winning some of the toughest competitions in the world, she is providing her time as a board member for one of the most interesting and rewarding non-profit organizations in New York.

Lawyer Doug Lasdon, kicked things off, when in 1984 he moved into a burned out building in Harlem, and began helping New York’s vulnerable and the homeless because nobody else was. Back then it was called the Legal Action Center for the Homeless, and today it operates as the Urban Justice Center (UJC)

“I need a lawyer, because I am not a lawyer,” says client Rufus Edward Glover II on the company website.

The UJC is a non-profit organization that helps the victims and the vulnerable of New York. People who have nowhere to turn, and don’t understand the system that seems to be hammering down on their backs.  They are a non-judgmental civil legal representative and social services program.

Selbst is part of that program, and she intends to raise funds for the people of New York by organizing the Blinds for Justice Charity Poker Event. The event will take place Sep 29 at Current in Chelsea, and all the proceeds will go towards the UJC.

In a strong show of support, fellow team member Daniel Negreanu will be in attendance, and although no names have been released as yet, I am sure even more poker celebrities will turn out in support of a worthy cause.

If you are in the area, and fancy it, then the buy-in will be $1,000. That will get you a seat into the event, some top grub, free drinks, and some live entertainment. There is even a PokerStars Caribbean Adventure (PCA) package up for grabs along with some other fantastic prizes. If you don’t want to play, but still want to attend, then the entry fee is $500.

PokerStars and Full Tilt has released the final number of donations received by the poker community in connection to their Nepal Earthquake fund. Players and members of staff donated $255,447.47; PokerStars have matched that figure, creating a final figure of $510,894.94.

Over 6,000 people were killed, and over 14,000 injured, after an earthquake measuring 7.8 on the Richter scale hit the country in April.

Ivey Wins Biggest Pot of the Year on Stars

The World Series of Poker (WSOP) is still waiting to see the world’s greatest poker player Phil Ivey. There is a good reason that he isn’t here. He is busy trying to change his status as one of the biggest online cash game losers of the year, to one of the biggest winners. He didn’t make much headway on that goal this weekend, but he did win the biggest pot PokerStars has seen this year.