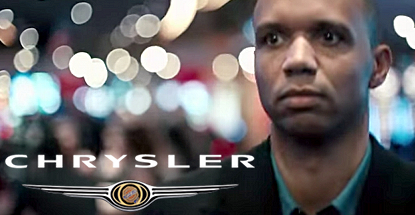 Poker great Phil Ivey is among the celebrities featured in a new ad campaign for the 2015 Chrysler 300 sedan.

The first 60-second commercial (viewable below) of Chrysler’s new ‘Drive Proud’ campaign features Ivey and a number of other “kings and queens of America” striding regally toward, er, something or other.

While they’re walking, Game of Thrones’ star Peter Dinklage adds an appropriately ominous voiceover about how there’s no “royal blood” in the US of A, and thus all the goodies are just waiting for people of suitably bold and dynamic personality to “reach out and take it.” (We don’t actually think Dinklage is suggesting you walk down to your local Chrysler dealer and just take a 300 off the lot, but you’ll never know until you try, will you?)

In addition to Ivey – identified in the accompanying presser as a “professional gambler/entrepreneur” – the spot features San Antonio Spurs assistant coach Becky Hammon, Reddit cofounder Alexis Ohanian, photographer Kwaku Alston, restaurateur Caroline Styne and a few others. None of the individuals are identified by name in the spot, leaving it up to the viewer to use their Audubon Field Guide of Minor American Celebrities to identify these uncrowned royals.

Chrysler said it selected the celebs based on their having achieved “meaningful success” in their respective fields and for representing “the entrepreneurial spirit of Americans who refuse to give up, dedicate themselves to a craft and have the guts to turn dreams into reality.” In Ivey’s case, they might have added “the guts and/or balls to conspire with lesser mortals to liberate millions of dollars from casinos by methods that courts have deemed illegal.”

Chrysler’s campaign will include additional 30-second spots, which hopefully will focus in on the individual celebs’ reason for choosing to drive a Chrysler 300, or at least temporarily walk toward one before diverting course to their more luxurious imported wheels. If Ivey is given his own spot, we humbly suggest the tagline read something along the lines of: “Unlike the Ivey League, the Chrysler 300 is guaranteed to start in the morning.”