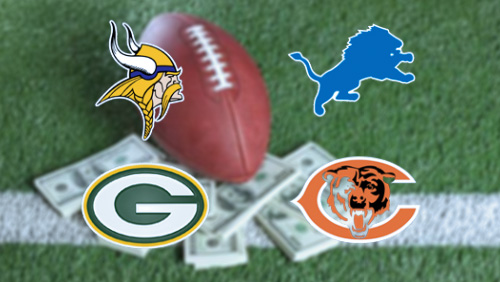 Teams from the NFC North had a combined regular season record of 34-30 a year ago. This upcoming season, the four teams will play eight games each against NFC East and AFC South opponents. Those two opposing divisions were the worst in their respective conferences last year. It’s certainly not out of the realm of possibility that NFC Central teams can possibly account for as many as 38 regular season wins. If that’s indeed the case, we may see three playoff teams come from this division.

Notes: All betting odds in this article are courtesy of Bodog.eu

John Fox enters his second season as head coach of the Chicago Bears. He’ll be expecting a sizable improvement from last year’s 6-10 team. One of the real oddities from last season was their dismal 1-7 home mark, and an impressive 5-3 record during away games. As a matter of fact, John Fox coached teams (Chicago/Denver) have gone an outstanding 29-13 (.690) on the road since 2011. I’m definitely not going out on a limb when I say Chicago will be substantially better at Soldier Field. John Fox can only hope that’s the case, in addition to his team turning in an encore of last season’s road success. Before arriving in Chicago, Fox spent the preceding four seasons as head coach in Denver. During his tenure there, the Broncos made the playoffs all four years, and it included a 2014 Super Bowl appearance. Despite those notable accomplishments, Fox was let go, and Denver went on to win last year’s Super Bowl. The Bears offense will receive a huge boost due to highly touted wide receiver Kevin White finally becoming available. The first pick by Chicago in 2015 missed all of last season due to injury. He’ll provide quarterback Jay Cutler with an additional dangerous weapon to compliment Alshon Jeffrey. With both of these wide receivers healthy, and Cutler slinging the pigskin, Chicago’s vertical passing game can be potentially lethal. Cutler is coming off a year in which he had a career best 92.3 quarterback rating.

The problem on offense will be replacing multidimensional running back Matt Forte who was lost to free agency. They do have a stable of fine young running backs, but none are in Forte’s class. Chicago was the 11th best rushing team in the NFL last year.

Chicago’s defense ranked 14th overall in yards (345.9) allowed a year ago. They proceeded to use six of their nine draft choices in 2016 on defensive players. It’s not that surprising when considering John Fox garnered his reputation in this league as a defensive guru.

After an incredibly efficacious nine year NFL career, all of which came in Detroit, future Hall of Fame wide receiver Calvin Johnson surprised many by retiring at a fairly young age of 30. Johnson left his craft by still on top of his game. He started all 16 games last year, hauled in 88 receptions for 1214 yards, and scored 10 touchdowns. The perennial all-pro leaves the NFL as a very rich man, and with his health relatively intact.

The loss of Johnson will be extremely difficult to replace. Nonetheless, they were able to sign free agent wide receivers Marvin Jones (Cincinnati) and veteran 35-year-old Anquan Boldin (Detroit) in an attempt to fill a portion of that void. Boldin is coming off the second least productive season of his career, and it remains to be seen what he has left in the tank. On the other hand, Jones is entering his fourth season, and last year was his best as a pro. Golden Tate has put together two straight outstanding seasons (189 receptions), and has proven to be very durable, evidenced by him missing just one game over the past five seasons. However, the naysayers will be quick to point out, Tate had a sizable decline of 518 receiving yards last year compared to that of two seasons ago. Hopefully for the Lions sake, Eric Ebron regains his health, and can be the tight end they had hoped for when making him a top draft choice in 2013.

I foresee the Lions running game to be least effective of the four NFL North teams. They were dead last in rushing offense during the 2015-2016 campaign, and nothing leads me to believe it will turn around in any type dramatic fashion. The offensive line must improve in order to aid a mediocre at running backs group. They also allowed their quarterbacks to be sacked 44 times, and that was the 10th most in football.

Similar to the offensive line, Detroit’s defense is anything for transplanted Lions fans to write home about. The right side of their line is formidable with tackle Haloti Ngata and end Ziggy Ansah. Truth be told, Ansah is on the cusp of stardom. However, the rest of the stop unit has a lot of question marks, and they’ll be hard pressed to hold their own against opposing offenses within their own division.

“The Pack is Back”

Green Bay failed to win the division last year for the first time since 2010. They were a NFL wild card team at 10-6, and with all things being considered, accounted themselves extremely well in the postseason. Their world championship hopes took a huge hit last year after #1 receiver Jordie Nelson sustained a season ending injury during preseason play. They were also hit hard by injuries to their inside linebackers. That forced perennial all-pro Clay Mathews switch from his regular outside spot. Well, Nelson is back, and Mathews has returned to outside linebacker. The Packers will be out to earn a postseason berth for the 6th consecutive year, and also attaining its 9th playoff appearance over the previous eleven seasons.

Aaron Rodgers is ecstatic to have Jordie Nelson back in the mix, and Randall Cobb may be a close second. Cobb struggled as Green Bay’s #1 receiver in place of Nelson, becoming a focal point for opposing defensive coordinators. With Nelson back, Cobb will see more single coverage, and can thrive again in his role as a #2 wide receiver. The Packers offensive line is arguably one of the top five in football, excelling at both run blocking, and pass protection. Eddie Lacy is having a great training camp, and looks primed for a big season. Backup James Starks is a vastly underrated running back in his own right, and possesses ample starting experience as well.

Barring key injuries, Green Bay’s defense can more than hold its own. Furthermore, with their explosive offense, they don’t have to be the “85 Bears” to be considered as a successful unit. General Manager Ted Thompson used four of his first five 2016 draft picks on defensive players. Considering Green Bay’s draft position, I thought their defensive picks were tremendous values, and will immediately provide quality depth. Thompson has exhibited an innate ability to draft players which are a perfect organizational fit. As a result, Green Bay has built from within better than any other franchise for over the past decade or so.

A lot of pundits predicted Minnesota to be a serious wild card contender last year. Yet, there weren’t too many calling for them to overtake Green Bay, and ultimately be donned with a NFC North crown. Lo and behold, that’s precisely what transpired, taking advantage of a 4-6 Green Bay slide down the stretch, and their 11-5 record reigned supreme. Unfortunately, they lost their opening playoff game in gut wrenching fashion, and that misfortune occurred as a result of Blair Walsh missing a chip shot winning field goal attempt as time expired. The good news is, they can take last season’s mostly positive experiences, and build off it to accomplish future success.

Quarterback Teddy Bridgewater enters his third NFL season. His numbers improved considerably last year compared to those of his rookie campaign. Bridgewater was intercepted just 9 times and completed a highly efficient 65.3% of his pass attempts last year. He’ll have a welcomed addition to his wide receiver group, courtesy 2016 top draft pick Laquon Treadwell. The former Ole Miss star will be joined by some other talented young receives in Stefon Diggs, Charles Johnson, and Cordarrelle Patterson. We must not forget 31-year-old stud running back Adrian Peterson. Although getting up in age by running back standards, Peterson hasn’t lost any of his youthful explosiveness, power, or speed. Like all older backs, remaining durable, fresh, and available is always a legitimate concern.

Minnesota ranked 5th in scoring defense (18.9 PPG) last year. They were also 7th in sacks with 43.0. Additionally, they finished 4th in 3rd down defense, allowing opponents a conversion rate of only 34.4%. With their personnel on that side of the ball staying virtually intact, and barring a plethora of injuries, Minnesota’s defense should be nothing short of an elite unit.

Do you want to know how good a head coach Mike Zimmer is? Well, I’m more than happy to share that with you. Despite Minnesota quarterbacks being sacked 96 times, and opposing quarterbacks completing 65% of their attempts against them, Zimmer’s Vikings still managed to go a combined 18-14 over the past two seasons. The Minnesota organization made a terrific hire when appointing Zimmer as their new head coach prior to the onset of their 2014 campaign.

Since Green Bay owns the softest NFL schedule, I have to give them a slight edge over Minnesota regarding winning a division title. I also wouldn’t be shocked to see Chicago be the division’s third playoff team this season. Chicago will play the second easiest NFL schedule. It’s worth noting, during Fox’s prior two head coaching jobs with Carolina and Dallas, his teams jumped from 16-18 to 27-10 from year one to two.