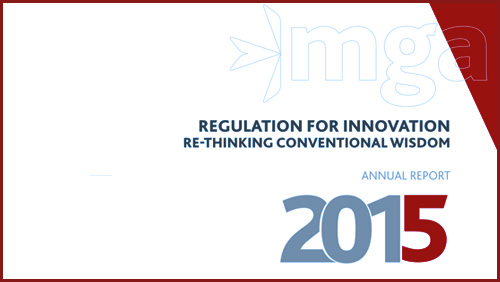 The MGA is the single governing body for the regulation of the gaming industry in Malta. During 2015, the gaming sector in Malta continued to experience healthy growth in both the land-based and remote gaming sectors. The following are key highlights from the Annual Report:

• The land based gaming sector grew by 3% year on year with total gross gaming revenue reaching €78.1m. Amounts played in the land based sector reached a total of €333.1m with total winnings amounting to €255m,

• The Authority continued to focus its efforts on the overhaul of the current legislation. The new legislation will provide an innovative regulatory framework which is robust and flexible enough to provide for effective regulatory oversight and at the same time facilitate industry growth and evolution,

• The regulatory oversight function was also strengthened through the setting up of a Supervisory Council with the responsibility for the integrity, consistency and ongoing development of the Authority’s regulatory performance,

• The Gaming Malta Foundation was set up with the aim of promoting Malta both locally and internationally as a leading jurisdiction and centre of excellence in the gaming industry,

• The Authority also focused on improving the efficacy of its operations through a right sizing exercise including the implementation of a robust ICT infrastructure and advanced information systems designed to facilitate processes, enhance the quality of its interface with licensees, improve information security and the optimisation of resource utilisation,

“2015 has been a very intensive and rewarding year on many fronts for the MGA. The results strengthen our determination to continue with our plans to enhance our regulatory performance. The aim of the three-year strategy

launched in 2014 is to create a sustainable industry base in the face of the challenges emanating from the European and global gaming sphere, as well as harnessing the growth of the sector through the diversification of markets and products made possible by innovative technologies and emerging markets,” stated the MGA’s Executive Chairman, Joseph Cuschieri. “An increased focus on quality, innovation, fairness, consumer protection, proportionality, evidence based regulation and consistency run through the building blocks of the Authority, its processes and the policy initiatives being taken up which are an integral part of the underlying strategy”, continued Mr Cuschieri.

The MGA’s 2015 annual report provides a detailed overview of the salient developments during the year under review. Throughout the year, the Authority’s efforts were committed to a fully inclusive and transparent approach in the reviewing and design of policy and administrative initiatives, whilst keeping an open dialogue with all stakeholders, consumers, regulators, operators and service providers. The regulatory framework overhaul is critical for the successful implementation of the gaming repositioning strategy in rendering Malta as a centre of excellence of global relevance in the future.
Although Malta’s second generation of gaming regulation remains founded on the prevention of crime and fraud, fairness of games, consumer protection and other vulnerable consumers, the legislative structure and regulatory approaches proposed for adoption in 2016, will provide a coherent governing regime that is principle-based, focused on regulatory performance and outcomes.

The 2015 Annual Report may be downloaded from HERE or a copy may be requested from the Authority.