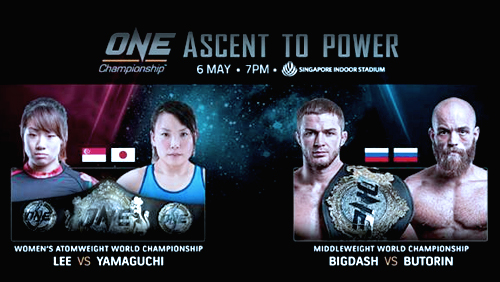 08 April 2016 – Singapore: The largest sports media property in Asian history, ONE Championship™ (ONE), in partnership with Official Timekeeper G-Shock, Under Armour, Mah Motors, and Marvel´s Captain America: Civil War, returns to the Lion City with another heart-thumping evening of world-class mixed martial arts action. Nine exciting new bouts are scheduled to take place on 6 May at the Singapore Indoor Stadium. In the main event, Singapore’s Angela Lee is set to do battle with Japan’s Mei Yamaguchi for the inaugural ONE Women’s Atomweight World Championship. In the co-main event, ONE Middleweight World Champion Vitaly Bigdash will defend his title against challenger Aleksei Butorin.

Tickets for ONE: ASCENT TO POWER are available at http://www.sportshubtix.com.sg.

“Unstoppable” Angela Lee of Waipahu, Hawaii, is one of the promotion’s most promising young prospects regardless of gender and weight class. Lee, who is of Singaporean and Korean descent, has strong roots in Singapore and trains at Asia’s premiere mixed martial arts gym, Evolve MMA. Lee’s beautiful combination of solid striking and grappling skills has proven to be a potent formula for success as she remains unbeaten so far in her MMA career. Lee will now challenge Japanese MMA veteran Mei Yamaguchi for the inaugural ONE Women’s Atomweight World Championship.

33-year-old Japanese MMA veteran Mei “V.V” Yamaguchi is a female atomweight from Tokyo with a 15-8 professional mixed martial arts record. She is the current Deep Jewels Atomweight Champion and has won her last three bouts, including two by knockout. Yamaguchi’s experience and championship mettle will prove to be the biggest test of the surging Angela Lee’s career in a battle for the ONE Women’s Atomweight World Championship.

ONE Middleweight World Champion Vitaly Bigdash of Rostov-on-don, Russia, will be making the first defense of his title since winning the belt back in October. Bigdash’s resounding technical knockout victory over former champion Igor Svirid is one of the most action-packed fights under ONE Championship, and he showcased tremendous heart and resolve to overcome a devastating attack by Svirid to score the upset. Now, he takes on his first challenger as champion in Aleksei Butorin.

St. Petersburg, Russia’s middleweight contender Aleksei Butorin debuted successfully in ONE Championship with an exciting knockout over highly-regarded Leandro Ataides last September. Butorin made waves with his frightening knockout power and relentless attack, showing fans why he remains undefeated in his seven-year mixed martial arts career. Now, Butorin receives the opportunity to fight for the title against ONE Middleweight World Champion Vitaly Bigdash.

Former ONE Featherweight World Champion Narantungalag Jadambaa of Mongolia makes his highly-anticipated return to the ONE cage since losing his title to current titleholder Marat “Cobra” Gafurov in an instant classic last November. Jadambaa and Gafurov went back-and-forth for four gruelling rounds before Gafurov was able to unseat the former champion. Jadambaa is now officially on the comeback trail, but will face tough foe Kotetsu Boku next.

Kotetsu “No Face” Boku, although originally from South Korea, is a Japanese mixed martial arts legend and former ONE Lightweight World Champion. With more than 30 professional fights on his fight resume, Boku has the experience of a seasoned veteran and has seen it all inside the cage. Always a crowd pleaser, Boku gets to showcase his dynamite fists once again as he takes on fellow former champion Narantungalag Jadambaa.

Undefeated 32-year-old Michal Pasternak of Pinczow, Poland, was successful in his ONE Championship debut against Rafael Silva, prevailing by decision to extend his win streak to 11. More than half of his victories have come either by knockout or submission, and he’ll be put to the test against Roger Gracie in a highly-anticipated three-round middleweight contest.

French mixed martial artist Sylvain Potard is an aggressive and powerful contender who has enjoyed mixed success in the ONE Championship cage. He is a 12-fight veteran who possesses experience and solid technique to match his undoubted power. In his promotional debut, he defeated highly-regarded American wrestler Jake Butler by knockout. Now, he returns to ONE to face Tatsuya Mizuno.

Tatsuya Mizuno is a 34-year-old Japanese mixed martial arts veteran from Tokyo. His extensive professional MMA record of 14 wins and 11 losses has given him knowledge and experience that is a cut above the level of many fighters. Mizuno uses his great all-round striking and grappling skills to subdue his opponents, and he gets another chance for victory inside the ONE Cage against Sylvain Potard.

Christian “The Warrior” Lee, younger brother of Angela “Unstoppable” Lee, has impressed in his first few outings in ONE Championship. Lee is riding the momentum of three stoppage wins inside the ONE Cage, two by highlight-reel knockout and the other by crafty submission. Lee looks to continue his early success but will face a stern test when he takes on the Philippines’ Cary Bullos.

32-year-old Filipino featherweight contender Cary “The Prince” Bullos is the URCC Visayas Bantamweight Champion. He has finished all his opponents in his seven wins, making him one of the top mixed martial arts prospects in the Philippines. Bullos fell short of victory in his first two appearances inside the ONE Cage, but he’s determined to get back in the win column by defeating Singapore’s Christian Lee.

21-year-old Singaporean mixed martial arts prospect Amir Khan will make his much-anticipated return to competition following a win over Filipino Jimmy Yabo back in November. Khan of Evolve MMA is a five-fight ONE Championship veteran who has only lost once inside the ONE Cage. The young gun is well-rounded and very aggressive, and will look to take on Chang Ching Hsiung next.

Taiwanese mixed martial artist “The Lightning” Chang Ching Hsiung will be making his ONE Championship debut. At four wins and three losses, Chang is a Sanda specialist and a solid prospect. He is the former Chinese Taipei K-1 Rules champion as well as the former Sanda-King champion. His first foray into Asia’s largest MMA promotion will be a tough one, when he takes on the promising young Amir Khan.

Unbeaten young Singaporean Benedict Ang has two wins and no losses inside the ONE Cage. The 19-year-old featherweight from Evolve MMA defeated mixed martial arts veteran Yohan Mulia Legowo in his last bout, stopping the Indonesian after two rounds of hard action. The highly-skilled Ang will showcase his talents once more when he faces Filipino Jimmy Yabo.

The Philippines’ Jimmy “The Silencer” Yabo is a former URCC standout with an impressive mixed martial arts record of five wins and two losses. He boasts a perfect knockout percentage, having finished all five of his opponents by KO within the distance, including his last bout when he felled Pakistan’s Bashir Ahmad with one punch. A rededicated Yabo is now looking for victory, but he’ll have to go through tough Singaporean Benedict Ang to get it.

Undefeated 21-year-old Dagistani Saygid Guseyn Arslanaliev impressed fans in his first appearance in the ONE Cage last January, winning by technical knockout at just over 30 seconds into the first round against Mishal Alfad. Arslanaliev brought the crowd to the edge of their seats from the opening bell, swarming his opponent with fearless aggression and impressive wrestling technique. Arslanaliev will take on China’s Ma Jia Wen next.

Chinese standout Ma Jia Wen is 2-1 inside the ONE Cage, and a victor in his last bout against compatriot Wang Ya Wei last November at ONE: DYNASTY OF CHAMPIONS – Beijing II. Ma is part of a quickly rising contingent of rock-solid Chinese mixed martial artists, and will look to put his skills further to the test against aggressive Dagistani standout Saygid Guseyn Arslanaliev.

ONE: Union of Warriors Complete with 10 Bouts
Press Releases
7 March 2016
.