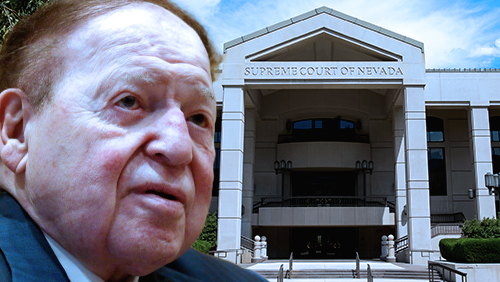 Another day, another court case for Sheldon Adelson.

On Monday, the Nevada Supreme Court heard a First Amendment case that pitted the Las Vegas Sands chairman against a national Jewish political group over an online petition posted in 2012, Associated Press reported.

The online petition used a “hyperlink” to an Associated Press news report on a judicial proceeding, effectively citing “the AP report as evidence that prostitution was tolerated at Sands’ Macau casinos.” This has prompted Adelson to file a suit against the National Jewish Democratic Council and two of its officers, David Harris and Marc Stanley, who he accused of “assassinating” his character with their false claims that “personally approved illegal activities in Macau resorts owned by Sands China Limited.”

The case was dismissed by a U.S. district court, but Adelson appealed. Now, the 2nd U.S. Circuit Court of Appeals wants the Nevada Supreme Court to clarify the law, and its answers will be used by the New York court that will determine whether Adelson can move forward with his defamation action, according to the Las Vegas Review Journal.

Daniel Polsenberg, a lawyer for Adelson, argued on Monday that the comments in the petition were not covered by the fair privilege rule or Nevada’s anti-SLAPP (Strategic Lawsuit Against Public Participation) law.

“The mere presence of an unexplained hyperlink, obscured by defendants’ own presentation and wording, does not transform the petition into a ‘report’ let alone a ‘fair’ report, of a judicial proceeding,” Polsenberg told the court, according to the report.

Lee Levine, lawyer for the council, said hyperlinks are familiar to most internet users and that it “meets a requirement to be considered fair reporting of a judicial proceeding protected by law.”

Incidentally, the “judicial proceedings” mentioned in the AP report was in connection with the wrongful termination lawsuit filed by Steve Jacobs, who is after Adelson for allegedly kicking him out of his Sands China CEO role in 2010 for still somewhat murky reasons.