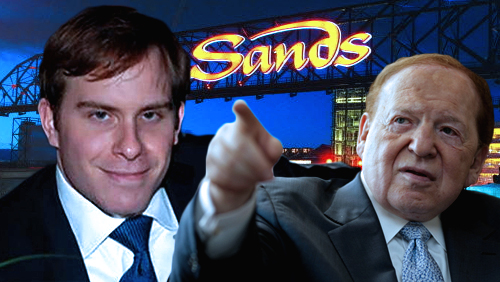 In a statement, the casino magnate announced he has formally appointed Patrick Dumont as the company’s financial leader—a position the 41-year-old executive “has already been performing.”

“Patrick has been providing strong leadership to the financial function and handling the principal duties of the CFO role very effectively for some time,” Adelson said in a company release.

Dumont fills a vacancy that has been left open since 2013, when Kenneth Kay stepped down from his then role as Sands’ finance chief. Kay was appointed as MGM Holdings Inc. chief financial officer last year, according to the Las Vegas Review Journal.

Dumont married Sivan Ochshorn, daughter of Adelson’s wife from a previous marriage, in 2009. A year later, he joined the Sands company, serving initially in operating and financial leadership positions before taking on the role of senior vice president of finance and strategy in July 2013.

Late last year, Dumont was outed as the orchestrator of Adelson’s Las Vegas Review Journal purchase. According to reports, Dumont pieced the deal together “at the behest of his father-in-law.”

Regarding his new position, Dumont said: “My primary focus will be on helping maintain the industry’s strongest balance sheet, preserving the financial flexibility needed to pursue new development opportunities, continuing our strong commitment to return excess capital to our shareholders and fulling our commitment to leading the industry in financial controls.

Before joining Las Vegas Sands, Dumont worked as an investment banker at Miller Buckfire and Bear Stearns. He has a Bachelor of Science in Mechanical Engineering from Johns Hopkins University and a Master of Business Administration from Columbia Business School.

According to a Bloomberg report, Dumond will be paid $1.2 million in base salary for his CFO role in Sands. He is also eligible for a bonus of a maximum 100 percent of his annual pay, as well as options for 650,000 shares.

Analysts, however, believe that placing family members in executive positions could potentially “complicate the situation significantly.” Charles Elson, director of the John L. Weinberg Center for Corporate Governance at the University of Delaware, told Bloomberg: “The problem is injecting personal relations into the situation. Sometimes the personal may affect the professional, and as an investor you don’t want to go there.”