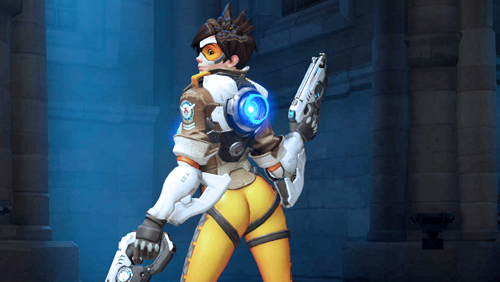 Video game and eSports outfit Blizzard Entertainment has decided to withdraw a controversial pose showing an impressive butt cleavage on a female character from their new shooter Overwatch prompting Lee Davy to try and figure out what this all means.


When I say ‘Lara Craft: Tomb Raider‘ what’s the first thing that pops into your head?

I remember shunning whole weekends with the lads so I could watch her climbing pyramids, jumping into lakes, and shooting the shit out of bad guys.

It doesn’t matter how many times I toss this around in the dusty recesses of my mind I come to the same conclusion. The team who created her must have sat down and had a discussion about the size of her breasts, and after that debate, they agreed to make them massive.

The way I see it, there is no reason to make her boobs that big apart from the rather obvious fact that most men’s vision of the perfect female form is a slender, fit, nubile young woman with enormous breasts.

I mean, come on, seriously, with boobs that big you would have given up the exploring years ago because of a backache.

But is it a big deal?

It seems it is because the debate over the sexuality of video game characters is hitting the headlines once again.  Only this time a prominent female character in a video game is having her butt shoved in our faces instead of her boobies.

Blizzard Entertainment, the creative force behind World of Warcraft and Hearthstone, have created a storm in a not so tiny teacup during the airing of their beta version of a shooter called Overwatch.

The shit hit Blizzard’s fan after a forum poster known as Fipps complained about a victory pose you could unlock from a female character named Tracer on us.battle.net forums.

The pose in question is a rear view shot of Tracer, in skin tight yellow leggings, revealing a mighty fine butt cleavage. Fipps didn’t feel this was an accurate portrayal of Tracer’s character, nor did she want her daughter growing up believing that Tracer is a sex symbol rather than a strong female character.

The response that she received was shockingly one-sided. There was very little support for Fipps until Overwatch game director Jeff Kaplan came to the rescue. He showed empathy, apologised, and even removed the pose from the game.

“We’ll continue to try and do better.” Wrote Kaplan.

Men Just Don’t Get it

The reaction to Fipps post, and the subsequent response to Kaplan’s decision, coupled with the fact that I am a bloke, tells me that men just don’t seem to get it when we start talking about the battle of the sexes.

An incredibly high volume of video game female characters are hyper-sexualised especially in the bust and butt areas. Both areas are always in full view of the operator and the clothing that the artists create deliberately accentuates form as a marketing strategy to attract more male gamers.

Can you remember many male characters in video games showing off their butt and balls squeezed into latex pants?

During the Global Poker League (GPL) Draft, I got angry when the panel started talking about the value of selecting attractive males into the teams for marketing purposes. It was the hypocrisy. I knew there would have been a lot more said had the same panel talked about the attractiveness of Xuan Liu, Vanessa Selbst, Kitty Kuo, Maria Ho, Celina Lin and Liv Boeree.

Then I took a big deep breath.

I remember watching the movie Suffragette recently and thinking how sad it was that not a lot had changed considering the lengths these incredible women went through to create equal rights for the sexes.

It’s easy for me to pick the GPL panel out in a vacuum. It’s easy for haters to tell Fipps that she should chill out and remember it’s only a game. But it’s these small things that matter because there are so many of them, it’s causing a big difference in the way men perceive women and the way women believe they have to behave in order to conform to a society that may cast them aside of they don’t.

If you don’t believe me, and you have teenage kids, then just leave my writing for a second and check out their Facebook photos.

As Natasha Walter reminds us in Living Dolls: The Return of Sexism:

“This assumption that a woman should be valued primarily for her sexy appearance is having a real effect on women’s visibility in our culture.”

Why would video games be any different from pop videos and celebrity magazines?

Walter then recounts a true story of how in 2009 it was revealed that female tennis players who appeared on center court at Wimbledon were chosen based on their looks.

There is an argument that characters like Lara Croft and Tracer are well-to-do images of female empowerment. I think that’s a convenient falsity that allows men to remain diseased by the ‘deaf effect’. I was scared to write this because, at 41 years of age, I am still finding it difficult to break free of that malaise and often worry about my inability to explain my thoughts and feelings on this subject because I don’t fully understand them myself.

“We can see how a focus on women’s physical attributes means there other attributes, from their sporting prowess to their articulacy to their experience, are devalued. So the equation that is often made between the hypersexual culture and women’s empowerment is a false one. Far from being empowering, this culture is claustrophobic and limiting.” Writes Walter.

There is a belief that we have done a lot of hard work in the area of sexism. People talk about the gap in equality never being closer. There is a lot of talk about males and females being treated equally. I think this is an illusion.

“In the hypersexual culture, the woman who has won is the woman who foregrounds her physical perfection and silences any discomfort she may feel. This objectified woman, so often celebrated as the wife or girlfriend of the heroic male rather than the heroine in her own life, is the living doll who has replaced the liberated woman who should be making her way into the twenty-first century.”


So how do we change this?

Or do what Fipps did; take the contrarian view on a forum filled with dissenters and stand your ground.

As individual bastions of this planet, we all have a responsibility to raise our awareness and see the real world because even men have mothers, sisters, wives and daughters.

It is not just a simple video game butt pose, it’s much more than that, but until we are all free from the ‘deaf effect’ surrounding this topic, we will always fail to see that.