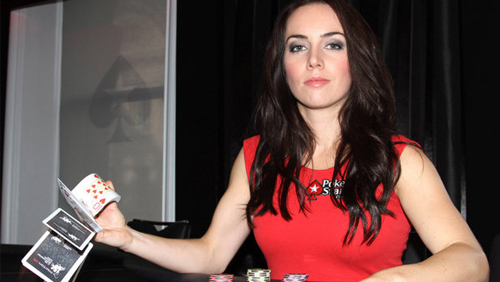 PokerStars Team Pro Liv Boeree is a guest on London Real this week where she fields questions about Dan Bilzerian, her San Remo win and why there aren’t more women playing poker.

I was playing in the £1,075 buy-in No-Limit Hold’em (NLHE) event at the World Series of Poker Europe (WSOPE) at The Casino at The Empire in London’s Leicester Square.

I had Chris Ferguson to my immediate right, John Juanda to my immediate left, and Davidi Kitai eyeballing me from across the felt. A player was eliminated. He left. In his place sat this striking young woman looking like she was the daughter of a love affair between Russell Brand and Metallica.

My first thought was, “this is a person worth watching.”

It seems I am not alone.

London Real’s tagline is ‘People Worth Watching.’ Founded in October 2011, they have interviewed some of the most interesting people in the world including the likes of Eddie Izzard, Wim Hof, Tim Ferriss, Chris Eubank, Irvine Welsh, and now Liv Boeree.

Part one of a two-part interview is currently showing on YouTube (or below if you prefer).

Boeree continues to impress in the hot seat. The show was filmed in Nov 2015 when she was the number one ranked female player in the Global Poker Index (GPI). Life was good for her; mirrored in the confident demeanour she displays to the camera. I also love her acute awareness of her interviewer’s lack of poker knowledge and how she accommodates his shortfall in her answers.

Here are a few nuggets taken from my panhandle.

“Bilzerian is over there somewhere…I wouldn’t call him a poker player.”

On Being a Professional Poker Player.

“I don’t use that word. I do other things as well. I am a poker player, though. I am a regular on the circuit and am profitable over my lifetime.”

“To become the best in poker you have to study the theory of poker within the game, but you also have to analyse events after the game – talk about hands with your peers. The game is more about logical analysis than anything else.

“There was a time when I became lazy and complacent. The Internet has provided so many new ways to learn the game. The average bad player today is better than a lot of the best players in 1998 for example.”

“It’s one of my strong points. Some days I feel like Bradley Cooper in Limitless. I get into a flow state.”

“A lot of players sell action. If I play in a high-stakes game, it’s rare that I will have 100% of myself. I didn’t play in the million dollar game in Vegas, but my boyfriend did, it was terrifying.”

On the High Stakes Games

“I would play if someone staked me for 80% for example, and providing I felt I was slightly profitable in the game. It’s tough if I am playing against the top nine players in the world. I am a good poker player, but I am not delusional.”

On The Lack of Women in the Game

“Things are getting a lot better although we are still very much underrepresented. I get very angry when people say the female brain is not cut out for poker. It drives me mad. The lack of women in the game is likely a combination of historical and societal factors. Also evolutionary factors play a part with males being more competitive and females more nurturing. Poker became popular at a time when women weren’t welcome.”

On Her Experience as a Female in Poker

“It wasn’t that bad. I was 21 when I first played live. I played in a £5 rebuy with £10 in my pocket in a cardroom in London. There were about 125 players in the tournament, and they all looked at me as if to say, “who is this chick?”

“It turned out they were all very nice. Back then I was different. I got a lot of attention and loved it. But I can understand that for a beginner coming into that environment and having everyone look at you because you have boobs, that’s scary.

“Men fall into three categories. The first are impartial. These are generally the good players. There is a minority of outwardly misogynistic who either play overly aggressive or are exceedingly nice. Then you have players who find you attractive and flirt with you. These generally play soft. Fortunately, most men these days fall into the first category.”

On Bluffing The Guy on Golden Balls.

“I felt awful. Jasper Carrot came up to me to say well done after the show, and I was crying. The crowd were booing and his family were there.”

On Her Competitive Advantage

“My biggest advantage is my experience. I have been playing for so long now. I have also surrounded myself with the best players in the world and learned so much from them.”

On Her San Remo Win

“I was devoted to being well-known within the poker community at that moment, but I never expected to win a big one so soon.”

“PokerStars has kept me afloat when I have either been playing poorly, or running badly. It would have been very stressful sometimes without them.”

“I don’t shove $100 bills into the underwear of strippers. My friends call me nitty. After my win in San Remo, I bought my apartment because I thought it would be a good investment. I kept my old shitty Seat Leon until it went moldy. I don’t own a car today and I hate designer clothes, although I like to look good.”