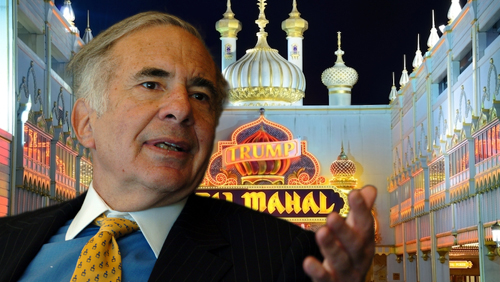 Trump Taj Mahal is officially out of bankruptcy.

Icahn, who held $292 million of the casino property debt, initially threw the Taj a $20 million lifeline in December 2014. Several months later, the billionaire investor reached a deal with Taj creditors that gave him control of the company. Then in June 2015, the state Casino Control Commission approved the businessman’s plan to rescue the Taj Mahal from bankruptcy.

Icahn now owns two of Atlantic City’s largest casinos. Just like the Taj Mahal, the billionaire investor acquired the Tropicana Casino from bankruptcy court by buying its debt at a steep discount before taking over it.

Icahn was quoted by Vegas Inc. saying, “A few years ago Tropicana was in bankruptcy and its fate uncertain, but since emerging in 2010, we have turned that property around and it has become one of Atlantic City’s few success stories. I am confident we can and will do the same for the Taj.”

Meanwhile, the Rhode Island General Assembly is set to vote on a proposal that will see a casino built near the Massachusetts border.

According to Chron.com, Twin River Management Group proposed an 85,000-square foot casino and hotel complex in Tiverton. If the legislation pushes through, the town of Tiverton would get at least $3 million each year.

State Sen. John Pagliarini believes the casino will provide income for the state and will have minimal effects on Tiverton, whose population is just under 16,000. But Tiverton Town Councilman Brett Pelletier is worried that a casino might not be a sustainable economic engine since it will be located close to the other New England gambling venues.

“It’s a black hole, and that’s by design. The design is not to energize the neighborhood. It’s to get everybody to your casino,” Pelletier said, according to Chron.com.