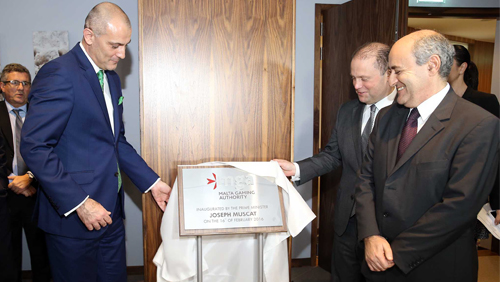 The Malta Gaming Authority’s (MGA) new offices, at SmartCity Malta were officially inaugurated on 16 February, 2016 by the Prime Minister of Malta, Dr Joseph Muscat, the MGA’s Senior Leadership Team and other distinguished guests.

With a floor area spanning over 2,562 square metres spread on two floors, the new MGA offices meet the latest environmental standards, technological infrastructure, corporate environment and modern facilities which have substantially improved the working environment for the 150 employees. Furthermore, the new offices incorporate all the facilities needed for the Authority to carry out its functions and activities in-house being press events, networking events, seminars and training for staff. The open plan and “hot desking” environment also caters for future growth.

In his opening address, Joseph Cuschieri, the MGA’s Executive Chairman, highlighted the milestones that have contributed to the success of the gaming authority since its inception in 2004. Mr Cuschieri mentioned the fact that Malta was the first EU Member State to enact comprehensive legislation on remote gaming. He added that industry stakeholders consider Malta as a thought leader and one of the foremost tried and tested jurisdictions in the world. He then extended his heartfelt thanks to the MGA’s employees and all those who lent their support to the success story of the Malta Gaming Authority. Mr Cuschieri mentioned that the most important project of the MGA this year is the new Gaming Act which is expected to be presented in Parliament before the summer recess. The Executive Chairman announced that the new legislation will be a game changer for Malta and will future proof Malta’s status as a jurisdiction of excellence. Some of the changes include new consumer protection measures as well as the simplification in the licensing structure from the current model to a Business to Business (B2B) and Business to Consumer (B2C) framework. This will eliminate duplication of checks and speed up time to market for the operators.

Speaking at the inauguration, Parliamentary Secretary for Competitiveness and Economic Growth, Dr Jose’ Herrera, praised the MGA for another milestone in its success story. “The new offices are equipped with the latest technology so that the Authority will be able to continue to deliver positive results as reflected in the interim performance report published just a few weeks ago. The gaming industry contributes substantially to Malta’s GDP and it is in our interest to sustain this sector.”

In his closing address, the Hon. Prime Minister, Dr Joseph Muscat, praised the MGA for having put in place a strategy that emphasises innovation and diversity in order to continue attracting investors to Malta. Dr Muscat concluded by applauding the role of a transparent and business friendly Authority which is continually reviewing its processes in order to be better equipped to deal with the ever-changing environment that surrounds this dynamic sector.

The opening ceremony ended with a guided tour of the premises.