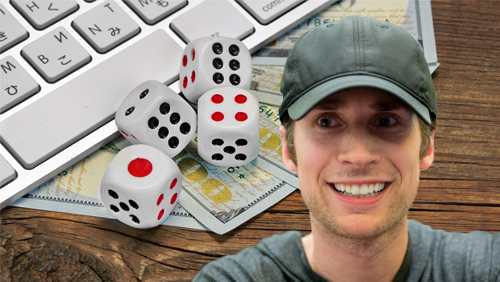 Three news stories rolled into one after Jeff Gross joins Global Poker Link, Ranking Hero launches Trixir and the LA Times publishes an editorial backing the licensing and regulation of all online gambling and not just fantasy sports.

We will start this titillating triumvirate of tales with more news emanating from Global Poker Link.

Tyler Hancock’s business is making waves thanks to their innovative staking platform allowing punters to take shares of professional poker players playing both live and online while sweating the action on Twitch (online).

Jeff Gross has joined the team. The high stakes regular immediately offered up staking options for his Aussie Millions package. He wasn’t alone. Canadian Courtney Gee also joined the team and started selling pieces of her Turbo Championships of Online Poker (TCOOP) on PokerStars. Dylan Hortin also has a package available for the TCOOP series.

The Global Poker Link may be getting some competition. Entering the Hendon Mob today I was greeting by a pop-up questionnaire asking me if I would be interested in staking players on the Hendon Mob site?

64.1 million people are living in the UK. Ranking Hero head honcho Nicolas Levi is one of them.

Did you know that more than half of those people are gamers?

In Malcom Gladwell’s New York Times Bestseller, Outliers, Gladwell suggests the key to becoming world class at anything lies in spending 10,000 practicing/working/participating in that thing. Game designer Jane McGonigal believes those 31 million UK youngsters would have devoured those 10,000 hours by the time they turn 21.

There is no hiding fact.

We love to escape the doldrums of life by immersing ourselves in greater meaning, and we find this in buckets and spades inside our games.

Ranking Hero, the social network for the poker community, understands this. They are doing something about this. They are launching a new gamification platform called Trixir.

The new platform has released a short manifesto. It states that most Fortune 500 companies will have a gamified platform by 2017. Ranking Hero is getting ahead of the curve.

The L.A. Times has come out in support of the legalisation of online gambling in an editorial piece entitled: License and Regulate All Online Gaming Sites, Not Just Fantasy Sports.

While there is nothing startlingly new about the meat in this particular pie, it is a feast that will be devoured by a lot of eyeballs, and that’s a great thing for the online gambling community.

The writer concentrates on the inconsistency between the states on all matters online gambling, and the recent ‘is it or isn’t it’ debate over the gambling element of Daily Fantasy Sports (DFS).

The view is clear that all forms of online gambling, not just DFS, should be regulated to ensure we aren’t feeding those lurking in the dark corners of the market, and everyone is protected.

“It’s already been proven that these Internet gaming sites are a scam, as in the house always wins. Let the morons lose their money,” was one of the comments at the end of the article.

I guess the article didn’t educate everyone then.