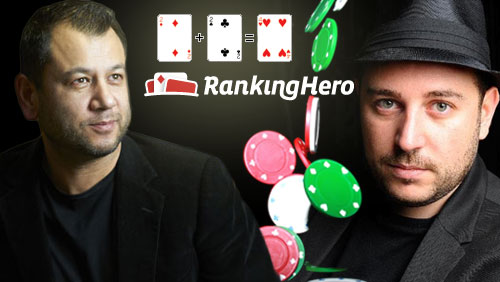 Ranking Hero partners with 2+2 as an extension of their HeroScore rankings, and partypoker players get the opportunity to face Rob Yong heads-up for $25,000 in cash.

Ranking Hero has announced a partnership with 2+2 that will enable members of the most popular poker forum in the world to join the HeroScore Rankings.

HeroScore was launched back in May with the intention of creating a ranking system that considered prestige and popularity as well as results. Speaking to CalvinAyre at the time of launch, Ranking Hero chief Nicolas Levi was very keen to push the contribution angle. The integration with 2+2 will certainly achieve that.

Members of 2+2 can enter their nickname into the Ranking Hero website and their one of a kind social algorithm will do its thing and create a score based on the contribution they have made towards the game. Expect to see Allen Kessler climbing up the ranks pretty rapidly.

Ranking Hero also announced that their members have won over a quarter of a billion dollars in live tournaments. Ranking Hero Executive Chairman Pierre Canali added to that tally recently when he finished fifth at the World Poker Tour (WPT) National London.

One man who would tick all the boxes if I was to create a HeroScore of my own is the Dusk Till Dawn (DTD) owner Rob Yong. Cut this man open and watch chips spill onto the floor.

Since his club inked a deal with partypoker Yong and his crew have been delivering value like a bunch of banshees. Only yesterday I was delivering the news that they are set to offer $400,000 in additional guarantees on a monthly basis, and today there is even more value coming your way.

If you are lucky enough to reach the final table of both the partypoker Micro & Mini, in the same night, then you will get the opportunity to face Yong in heads-up action with the chance to win $25,000 in cash.

There are a few caveats, so pay attention.

You do need to be a member of the Dusk Till Dawn live cardroom, re-entries and late registration do not count. You need to be on time and on a single bullet to face the mighty Yong. Winners get the opportunity to play Yong either live or online. The promotion will end at the end of the month.