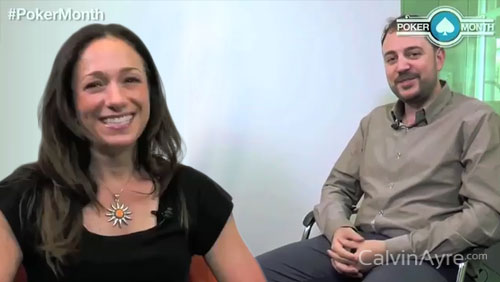 Nicolas Levi is the Co-Founder of RankingHero and a former professional poker player with almost $2million in total winnings.  Since his poker playing days, Levi launched Ranking Hero, a “poker database made social” website, to revive and build camaraderie within the poker community.

Levi has recently revealed RankingHero’s latest feature, a new 3D ranking system he calls “HeroScore”.  In this interview, we discuss the innovation behind Levi’s rankings, its purpose within the poker community and how adding social elements to poker will help boost the industry’s ecosystem.

Becky Liggero: Thank you for joining me today, Nicolas.  Lets start by talking about this particular ranking that you’ve created because its different than a lot of the other rankings that are out there and available today.  Tell me why you decided to launch this and how it’s different?

Nicolas Levi: Yes, it’s a big challenge.  Its the first ranking that doesn’t try to rank just the results of players.  Ranking results itself is good but its always difficult because you don’t know the losses of the poker players, you just know the winnings.

So you can quickly see a snapshot – if you look at Moorman you’ll see he has more points for online than for live, but we try not to favor one of the two, so the online players are treated the same as the live players which is the first time a ranking has done that.  Its not a small challenge – the numbers that come out of an online player are very different than the numbers that come out of a live player, so how do you match it so that a good achievement is measured fairly?

The second dimension is popularity, that’s why we have people like Dan Bilzerian in the top 10.  Love him or hate him, he’s known by millions of people as a poker player, so he influences our industry greatly and that’s what the measurement ranks, it doesn’t say who do you like and who do you not like, it just says who has influence and prestige in the industry.  Prestige for Dan is maybe an interesting word [laughs].

But then the third dimension is the hardest one to measure because for popularity you just measure how many Twitter followers they have, how many Facebook followers they have, you have a good idea of who is famous and who is not.  For contribution it’s the most interesting part.  We have a part of Ranking Hero that looks like a resume where you can add your jobs (or we will add them for you) and you can add your achievement – if you won a British Poker Award or whatever, its on there- and then it has a number of base points that go in the algorithm.

But then somebody that blogs might not have the same influence as when Negreanu does a blog, so people from that community go on their achievements and click a “plus” button to say this achievement has affected me positively.  Therefore somebody that is very, very impacting, his score is going up naturally as a result of the database.

BL: Excellent and for anyone that follows poker obviously we have the World Series in Vegas kicking off right now- why are your rankings especially exciting and something to watch while we have a huge tournament like the World Series of Poker going on?

NL: Well the interesting part about it is we try to push the technology – we launched in 2012 in poker and the idea was to fill a gap that didn’t exist.

What it means when we say we are a database made social is that you follow the people you like, a bit like a Facebook-style activity and you will see what they post on Twitter, what they post on Facebook, what they post on Ranking Hero, but you also see the results so you get notifications when your friend cashes.  For the World Series we’re going to push it one step further so we update our database every hour even when the tournament is running, so you could get a phone alert saying your friend has just finished 32nd while the tournament is still going on and you can congratulate them right away.

One thing that we all hate, when we bust from a tournament and we have to tell everybody, “ I busted”, to get some love, you know? So here if you have lots of friends on Ranking Hero they will know that you have busted and they will either congratulate you or give you a cuddle- either way, immediately.  You don’t have to go on your Facebook and brag to your mother that you won a tournament – you get a question like, “what does it mean, I don’t get it, you just talked about something in Chinese”- but here your poker network will automatically know.

BL: Ya, that’s really cool. So tell me why online poker companies and other businesses would be interested in these rankings that you have?

The first reason they might be interested is because of the audience, but as a whole I think the purpose is to help solidify the poker economy.

Its very difficult to retain players today for online rooms. I think one of the reasons is because we’re not delivering on the promise.  There are a couple of promises you can make to a player when he’s signing up to an online room.  One would be you’re going to get rich- WSOP famously says anyone can win- this was maybe true for Moneymaker, but its been a few years since an amateur has won it and it may be true of the World Series but it doesn’t quite represent what poker is.

The other promise you can make to people is you’re going to become really good and its easy, just take a few lessons and you’re going to be rich. So this would be on-boarding them into a coaching path, an aspirational path- look at these top pros and try to be like them- and this works and its useful, but actually the vast majority of poker players are just looking for friendships, social experience and having fun.  So we think that means free poker, we think that means social poker, leave them to Zynga, this is a path that doesn’t convert into making some rake or whatever.

Fun is like a dirty word almost, its not- poker is fundamentally about betting, raising and pressuring people into folding , the guts, all these things. If the triggers of social poker are strong enough to make the game interesting despite the lack of money, then surely we should try them in real poker.  So one of these would be leaderboards – on Ranking Hero you won’t just see the top ten, you will be able to create your little widget on your homepage and see where you rank amongst your buddies.  In the Hero Score you get an alert when you overtake one of your friends in the Hero Score and its about you and your network, not about looking up to the sky.

So I think ultimately we are a retention tool, an engagement tool and we have data to show that we’re not completely wrong- if you bring your player into a social experience then he’s going to enjoy the game longer and find ultimately what he’s looking for, rather than try for something and eventually drop.  The industry is kind of consuming the market – the attrition rate of poker players is notoriously bad and there is a way against it, its to actually deliver.

BL: Yes, its true. Its all about recreational players and entertainment and having fun, even though it’s a dirty word.

NL: Well not to me.  But I just want to make the distinction that we can provide a social experience without removing the money aspect.

BL: Got it, got it.  Well thank you Nicholas for joining me today, I really appreciate it.